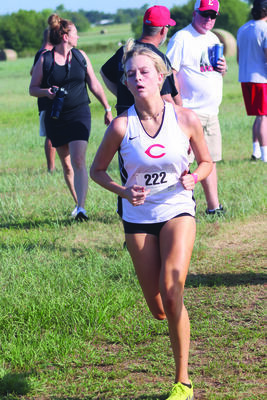 The Comanche cross country teams opened the season at a meet in Duncan last Saturday and came away with some solid team and individual performances.

The Comanche High School girls finished second as a team with senior Jaylee Miller leading the way with a second-place overall finish with a time of 13:54.33 over the two-mile course.

The Indians got two top 20 performances. Senior Landon Ellis was in the lead back at the halfway turn and finished fifth overall with a time of 17:49.77. Freshman Brycen Lassley finished 20th with a time of 19:55.49. He was the second-highest placing freshman in the 5K event.

Also competing, but not scoring for Comanche were Owen Bigford in 76th place, Tristin Frye in 77th place, Gage Jessen in 78th.

There were a total of 120 runners in the event.

Keeley Peacock rounded out scoring for Comanche in 45th place with a time of 17:08.49.

In the junior high boys event, Comanche’s Jackson Lohrer brought home first place for the Jr. Indians with a time of 12:49.02, 13 seconds ahead of the second place finisher over the two-mile run.