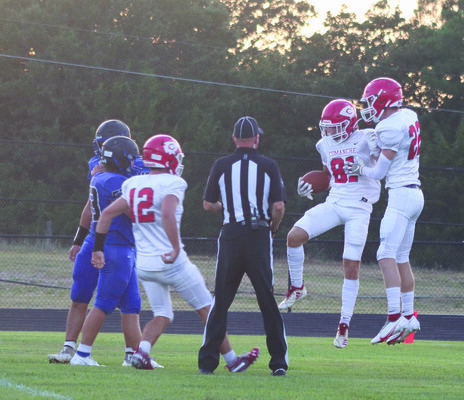 The Comanche Indians opened the 2021 season with a dominating performance on the road against Dickson as the Indians came home with a 45-14 win last Friday night.

Comanche quarterback Kooper Doucet threw for three touchdowns and ran for another, but there were plenty of accolades to go around.

Senior receivers Devon McCarty and Mason Kulbeth both had 100-yard games and combined for three scores. Running backs Tucker Oliver and Braylen Butler combined for 142 yards and three touchdowns. Then there was the offensive line led by Sam Siebert that made the success of the ball handlers possible by opening up holes and giving pass protection. Coaches credited Siebert with about seven pancake blocks in the game.

“The kids came out and played hard and real aggressive,” said Casy Rowell, head coach. “A few times it was too aggressive and it cost us some penalties. We have to correct those, but overall, we were pleased with how things went. We had no bad snaps. We had a couple of delay of game penalties, but everything was pretty good for the first game and the hard work that we put in at practice paid off. We need to get in better shape so we can go at the pace we did earlier in the game for all four quarters.”

Even with having a hand in four touchdowns on offense, Doucet made just as much of an impact on defense from his defensive end position. He had nine tackles, including six tackles for losses.

Comanche scored on its first five possessions and did not have its first punt until late in the third quarter.

The Indians opened scoring with a 14-yard touchdown pass on a slant route from Doucet to Kulbeth less than three minutes into the game.

Braylen Butler, who got the starting nod at one of the running back spots after expected starter Bryson Evans missed the game due to an illness, scored on a 16-yard run later in the quarter. He ended up finishing with eight carries for 62 yards and two scores.

“The coaches were not surprised at all about what he did,” Rowell said. “We know what he is capable of and had already planned to get him some snaps in the game.”

On their next possession, Comanche pushed its lead to 19-0 following McCarty’s leap where he won a jump ball with the Dickson cornerback and then outran the rest of the Dickson secondary to the end zone for the score.

Dickson would then get on the scoreboard on a three-yard run by River Moody with 7:15 left in the half to cut the lead to 19-6.

The Comets had some success running to the outside in the first half, but the Indians were able to make some adjustments and keep the outside runs in check.

“Dickson does a good job of sucking you inside and then hitting the outside,” Rowell said. “We told our guys to be more patient and to make their reads instead of just flying up in the middle. That was the only adjustment that we made and it worked.”

Comanche’s offense would answer right back with a drive that Doucet capped off with a 1-yard quarterback sneak that pushed the lead to 25-6. The big play of the drive was a 27-pass from Doucet to McCarty.

Just over a minute later, the Indians would score again following a turnover. Butler found himself in the end zone again as he ran in from 20 yards out.

The Comets scored with less than a minute left in the half on a 3-yard run by Johnny Smith to make the halftime score, 32-14.

In the fourth quarter, Doucet and Kulbeth connected again, this time for a 37-yard touchdown pass that would put the Indians up 45-14.

Freshman kicker Colby Shannon also earned his coach’s praise after going 2-for-4 in extra points, kept Dickson on its side of the 50 on kickoffs and had a couple of good punts.

“I thought he did really well for his first game as a freshman,” Rowell said.

“They do have some similarities to Dickson,” Rowell said. “They spread the offense out more, but they still run a tight end and run similar style plays. They look like a tough football team. I think the Dickson game helped us prepare for this one.”

Healdton returns nine starters on offense and eight on defense from last year’s 3-5 team. Junior quarterback Beau Bradberry can be a dual threat, passing for more than 1,500 yards and running for 500, as a sophomore in 2020.

They also have a 1,000-yard back returning in Austin Perdue, who scored 12 touchdowns last season.