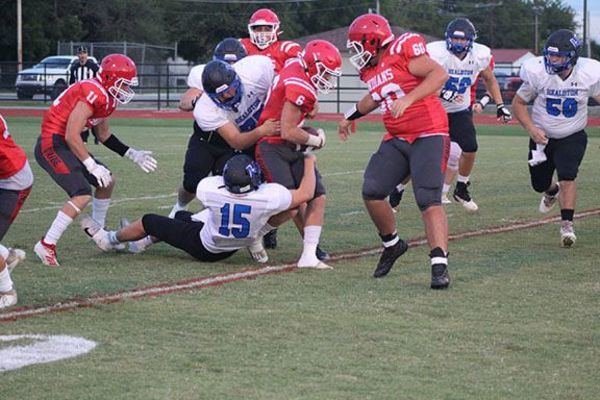 Comanche’s Bryson Evans tries to break through a tackle in the first quarter in the Indians’ 34-12 win over Healdton last Friday.

The Comanche Indians were short on manpower but long on determination as they downed the visiting Healdton Bulldogs, 34-12.

The Indians had just 18 yards of total offense in the first half but made some halftime adjustments to get the offense rolling.

Meanwhile, the defense was taking up the scoring slack of the offense in the first half. The Indians had two fumble recoveries for touchdowns by Tucker Oliver and Noah Nichols in the first quarter that put the Indians ahead and kept them there.

"They think the seniors and the upperclassmen really stepped up," said Casy Rowell, head coach. "Then we had some younger guys step in and play some big roles."

None were bigger than sophomores Tucker Oliver and Noah Nichols. The two players were responsible for the two scoop-and-score touchdown runs. Oliver went 90 yards for his score, while Nichols went 31 for his touchdown.

"The sophomores had to step up for us and they did," Rowell said. "The offensive line really came through for us. Then Bryson Evans had 130 yards for us, the most in quite a while, and that was huge."

Evans was playing quarterback in the place of regular starter Kooper Doucet, one of several Indians out for the game due to COVID-19 quarantine.

Evans proved to be elusive on two touchdown scrambles and had another called back on a penalty.

Rowell did not think the slow start could be attributed as much to Healdton's defense as much as his team's emotions.

"Our guys are learning how to deal with big-game emotions," Rowell said. "You can get out of focus. We prepare for every kind of defense and once the game wore on, we were able to get our focus back."

Despite missing several players, Rowell was not surprised his team was able to win by three scores.

"Everyone works hard and the staff makes sure they are prepared every week," Rowell said. "One of our strengths is our depth. You can only play 11 at a time and – no disrespect to Healdton - I thought our 11 was better than their 11."

Healdton was driving in the first quarter when a hit by a Comanche defender shot the ball forward out of the hands of Bulldog running back Austin Perdue. Oliver picked the ball up on the run and after getting by the first wave of Bulldogs, had smooth sailing the rest of the way down the visitors' sideline to the end zone. The two-point conversion pass from Evans to Brady Dobbins gave the Indians an 8-0 lead and they would stay ahead the rest of the game.

Healdton (1-1) would answer right back just 20 seconds later on a 62-yard by Perdue, but the conversion failed to keep the score at 8-6.

Less than two minutes later, Nichols scooped up and returned his fumble to push the lead to 14-6.

In the second half, the offense began to move the ball behind Evans. Evans' first touchdown came on a quarterback keeper that went for 53 yards around the right end.

In the fourth quarter, Gage Allie gave the Indians a comfortable lead on a four-yard run two plays after he had ripped off a 40-yard run down to the Healdton one. Allie's touchdown pushed the lead to 27-6.

The Bulldogs, though, were not quite done yet, scoring on an 11-yard pass play with 5:48 to go to cut the lead to 27-12 and keep the game within reach.

They would get no closer, however, as Evans ripped off a 57-yard touchdown run with 1:40 left in the game to seal the win for Comanche. Owen Bigford's point after would make the final, 34-12.

The Indians hit the road for the first time this season as they will try to play homecoming spoiler to Lone Grove (1-1). The Longhorns opened the season with a 41-40 overtime win over Purcell. Last week, they lost a close 21-19 game to Tecumseh.

"They are a good team," Rowell said. "They have a high-caliber offense and it is going to be a challenge for us. The group of guys we have is ready. We can't help or worry about certain things out of our control. We are looking forward to the challenge. They are coached well and we need a game like this. We're excited about it."

It will be the last non-district game before the Indians start their district schedule next week by hosting Marlow.