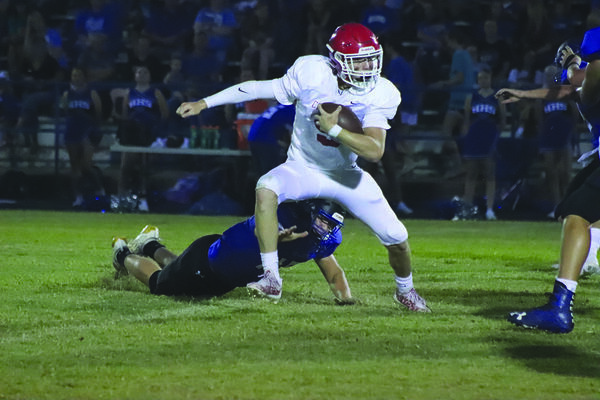 Comanche won its second game in a row, overpowering Healdton, 35-14, on the road last Friday. The Indians held a 35-0 lead before the Bulldogs scored two late in the fourth quarter.

Tucker Oliver had a huge game for Comanche on both sides of the ball. The junior had a career night, rushing for 191 yards and three touchdowns on offense. On defense, he recovered two fumbles and intercepted a pass.

The offense played sluggish at times, but the defense kept the Healdton offense in check most of the night.

The Bulldogs did not complete a pass all game.

The game also marked the return of senior Bryson Evans, who missed the first week due to an illness. He made his presence known quickly as he was on the receiving end of a Kooper Doucet 11-yard touchdown pass with less than two minutes gone off the first quarter clock.

The game stayed at 7-0 throughout the rest of the quarter before the Indians were able to take control in the second quarter.

Seven seconds into the second quarter, Evans this time took a handoff and scored from nine yards out to give Comanche a 13-0 lead.

Less than two minutes later, Oliver would kick off his scoring spree with a long 56-yard run that pushed the lead to 19-0.

Oliver was not done yet in the quarter. With just over three minutes remaining, Oliver took off on a 30-yard jaunt that saw him spin away from a couple of would-be tacklers along the way.

On Healdton’s next possession, Oliver almost returned an interception for a touchdown, taking it down to the Bulldogs’ 13.

Comanche couldn’t take advantage of the good field position however, and settled for a 26-0 halftime lead.

The defense decided to get in on the scoring fun, when Kasen VanBuskirk sacked the Healdton quarterback in the endzone for two points less than two minutes into the third quarter.

The Indians would get their final score in the fourth quarter on an 8-yard run by Oliver that pushed the lead to 35-0.

Healdton’s Maurice Veia would score twice for the Bulldogs after that on runs of three and four yards.

The Indians host Lone Grove for their home opener. Last season, the Longhorns got a lopsided 50-12 victory in Lone Grove. It was a tough game for the Indians who were missing several players due to COVID-19 quarantine.

It will be the beginning of a tough three-game stretch for Comanche which hosts Lone Grove this week, travels to Marlow next week and hosts Davis on Oct. 1.

Lone Grove also had an extra week to prepare as it had a week zero game and was off last week.

The Longhorns were picked to finish third in the preseason Vype magazine District 3A-2 poll.

The Fall breaking point and Funyuns

State must do better job with former prisoners