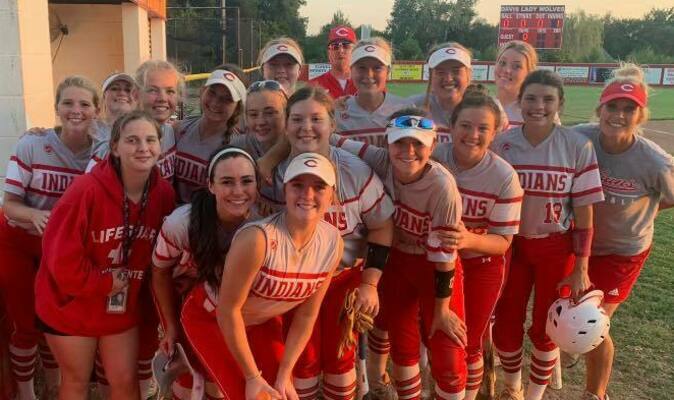 Updated: We have been informed that Comanche hosted a regional before in 2000. The story has been updated.

It was as dramatic as it was euphoric.

With their fans sweating in the stands from more than the September heat, the Comanche Lady Indians not only needed to defeat Davis to win the district championship and earn the right to host a regional tournament, they needed to win by at least seven runs.

They managed to do just that, taking a 10-1 victory to claim the district championship.

It was a big turnaround from 24 hours earlier where the Lady Indians suffered an 8-4 loss to add to the pressure of Tuesday's game.

"I just think they finally relaxed," said Aaron Minor, head coach. "I don't know, maybe they put too much pressure on themselves on Monday. That's what I told them (Monday) that made me so frustrated because I know what we are capable of and then we showed that (Tuesday)."

Jentry Whaley got the win on the mound, limiting the Lady Wolves to one run on seven hits.

"She and Kamrey (Rendon) are two different types of pitchers and you just never know what a team is going to struggle with," Minor said. "On Monday when they hit Kam a little bit, we decided to go with Jentry, who is more a rise ball pitcher. We wanted to pitch her to see if it would throw them off a little bit and it worked out."

Another difference from Monday was the Lady Indians were able to get the timely hits they needed to drive in runs on Tuesday. Eight of the nine hitters in the lineup got at least one hit with six of them having multiple-hit games..

Comanche scored two runs each in the first and second innings to take a 4-0 lead. In the fourth inning, the Lady Indians put up four more runs to push the lead to 8-0 to give them the runs they needed to win the district.

The drama did not end there. In the top of the fifth, Comanche added two runs to push the lead to 10-0 and was threatening to end the game by run-rule. The Lady Indians got tantalizing close to accomplishing that before a two-out RBI double by Davis in the bottom of the fifth kept the game alive.

"I never panicked (having to go all seven innings)," Minor said. "First of all, we still had a two-run cushion as far as the seven runs we needed. It was also, whatever happened, happened. I knew we had played well all day and if we kept playing well we would get the win."

The Lady Indians played the field cleanly with no errors. Slovak also threw out a couple of baserunners trying to steal bases.

Minor is unsure when Comanche will find out who they are hosting in the regional tournament as some teams are still playing district games though it should be some time next week. The dates of the regional are Sept. 30 - Oct. 1.

It is first regional hosted by Comanche since 2000.

"I'm really proud of this team," Minor said. "This has been a goal of ours the past few years, but we were never able to get it done. With a young team like this, you never know how they are going to do and they just continued to get better and better. They have talent, but they also get along so well together. There's no drama on the team and that's been the biggest and most pleasant thing about this group."