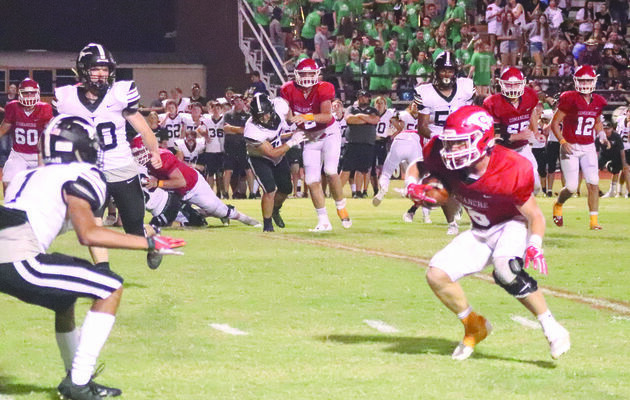 Comanche senior running back/receiver Bryson Evans and junior quarterback Kooper Doucet grew up playing backyard football together where they would draw out plays on the ground. Those plays may have won imaginary Super Bowls, but last Friday, the two friends drew up a play that led to a real win for their high school football team.

After seizing the momentum in the first half to take a 20-6 halftime lead in the Indians’ home opener against Lone Grove, Comanche saw the Longhorns score 17 unanswered points in the second half to take a 23-20 lead with a little more than three minutes left on the clock.

Undeterred, the Indians drove from their own 35-yard line down the field into Longhorn territory where they eventually found themselves with a fourth-and-7 from their own 14-yard line.

“Coach Rowell was thinking about kicking a field goal, but Kooper said he wanted to run a play,” Evans said. “Coach put it in our hands to come up with a play.”

The play they came up with was to line up Evans on the right side of the field.

“I knew Kooper would want to roll out that way,” Evans said. “When the ball was snapped, I ran an out, but it wasn’t there. The other receiver had run a slant across the middle, so I turned upfield. When I turned around Kooper had already thrown the ball.”

The defender responsible for covering Evans initially followed Evans on the out route, but he never saw Evans turn up the field as he kept his eyes on Doucet. By the time the defender realized it, Evans was five yards behind him and Doucet dropped the ball into Evans hands at about the 7. Evans did the rest and raced into the end zone for the go-ahead touchdown with 17 seconds left on the clock.

Freshman Colby Shannon nailed the important extra point to give the Indians a four-point lead and to force the Longhorns to have to score a touchdown.

“It was an amazing game,” said Casy Rowell, head coach. “It was everything you want in a game as a coach. Nobody thought we could could win, but we did, and that’s what matters and we’ve been saying that for years.”

“It’s just amazing to see that come into fruition because these kids really need to see that if they have faith and you work hard, the results will come,” Rowell said. “That’s what we’ve been trying to do the past couple of years. We’ve had some bad things go our way and some good things go our way. To see these boys step up against a really, really talented team and play their hearts out at home and then managed to have a comeback victory after dominating in the first half was just awesome.”

He was not surprised that Doucet and Evans were able to draw up a successful play.

“They’ve been working together and on their timing for years,” Rowell said. “We allow the guys to have some freedom. We’re not out there on the field with them and I can’t help them. They’ve got to figure it out and in a very clutch moment, they figured it out.”

There was plenty of credit to go around.

Lone Grove took an early 6-0 lead in the first quarter. The second quarter belonged to the Indians, however as Doucet ran for short two scores and following a successful onside kick recovered by Lucas Gordon, Tucker Oliver capped off the drive with a 9-yard run that gave the Indians a 20-6 halftime lead.

The Longhorns came out in the third quarter determined to take the momentum back and with the help of some untimely penalties on Comanche, they were able to do just that. They stopped Comanche on its first drive of the third quarter and then answered with a touchdown drive that cut the lead to 20-13.

In the fourth quarter, Lone Grove scored again to tie the game. Comanche fumbled on its next possession, setting up the Longhorns in Comanche territory. The Indian defense made a stand late in the drive to force the field goal to give Lone Grove a 23-20 lead that would be the set-up for the final winning drive for Comanche.

“These guys have got that brother bond going on,” Rowell said. “Our brotherhood is our strength. You could see it out there Friday night. They were fighting for each other and after the big play, they’re out there hugging each other, high fiving and screaming. That’s exactly what we’ve been working toward as a program.”

A regular season game does not get much more momentous than it will this week when Comanche travels to rival Marlow for the district opener.

Both teams come into the game with 3-0 non-district record.

An interesting part of the match-up this week will be Comanche’s defense against Marlow quarterback Jace Gilbert. The Indian defense has only given up 16 yards of passing total in the first three games. Gilbert has thrown for 565 yards and five touchdowns. He has surpassed 3,000 yards for his career.

His top receiver, Will Bergner has 240 yards with two scores. Bergner has surpassed 1,000 in career receiving yards.

Gilbert is dangerous as a kicker. He is 4-for-4 on field goal attempts with the shortest being 37 yards and a long of 42. On kickoffs, 24 of his 25 kicks have been touchbacks.

“We’re not approaching this week any different than we do any other week,” Rowell said. “We’re just going to work on us this week. Yeah, it’s going to be an exciting game with a great atmosphere, our kids know that.”