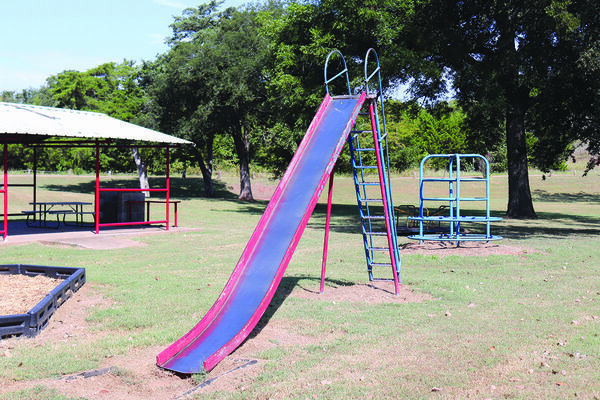 The Comanche City Council made the tough decision as to what has essentially been a Comanche landmark for local citizens when they voted to remove the old slide at Jackson Park due to safety issues.

They made the decision following a report from a consultant with the city’s insurance carrier, who said the slide was too dangerous to continue to be in place at the park. He also said the insurance company would not carry liability on injuries from the slide, meaning the city would be 100 percent financially responsible for any accidents that occur.

“This type of slide has been determined to no longer meet US playground standards, it is obsolete and unsafe,” Ralls said of the comments he received from the inspector. “There are entrapment gaps and open holes that could catch fingers or hoodie strings and injure or strangle a user. The ladder rungs and handrails are head and neck entrapments and don’t meet industry standards. There is no fall protection surfacing around this element. The landing zone has filled in and does not provide a sufficient drop to lower the feet when exiting the slide. The support bands on the bottom of the slide have rusted and corroded and pose a collapse hazard as well as a laceration hazard.”

The council decided to surplus the slide in order to sell it to anyone who wants to purchase the decades-old slide that multiple Comanche generations of children have used.

The decision to have a consultant look at the playground equipment came after a child was recently injured on a swing at the park.

It was also recommended that fewer swings be available because they were too close together and new hardware for the swings will be added. More covering in the playground area will also be added, though Ralls said he was going to look into alternatives other than just having regular mulch.

Another issue was the plastic slides were too hot and the solution will be to add coverings to the slides to keep the temperatures down. The picnic tables will be replaced. The old merry-go-round can stay as the inspector said it does not move fast enough to cause any serious harm.