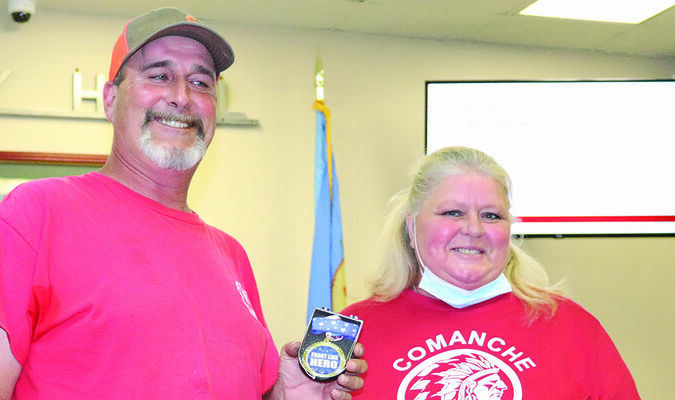 “We’re getting along better,” said Chuck Ralls, city manager, about the relationship with contractor.

“We had some water pipe issues. The sidewalks were directly on top of the water pipes to businesses and they were getting broken. We have got those fixed and resolved.”

Ralls also said there have been some antsy and frustrated business owners about how difficult it is for customers to get to the business. He said the contractor has put down gravel walkways to make it easier for customers to get to the businesses. There will be some parking spaces on the corners lost due to making the sidewalks compliant with American with Disabilities Act (ADA).

In other business, the council was given a request by the Comanche softball booster club about adding air conditioning and insulation to the concession stand at the Field of Dreams.

The council accepted an environmental grant from DEQ for a recycling trailer that will be used at various city events as a community service. The city will have to pay $12,400 up front with the DEQ reimbursing the city.

In the Public Works Authority portion of the meeting, Ralls informed the trustees about water quality issues. The manganese level on the water being drawn from Waurika Lake was higher than normal, causing the quality issue. The levels were even higher at Comanche Lake, so the city stayed on Waurika Lake water and chemicals were added to get the manganese levels down and the water should have been flushed out of the system in a few days.

There were two awards presented during the meeting. The PWA was presented a certified excellent award on behalf of Certified Healthy Oklahoma. It is the highest award given by the organization.

Another award, the Front Line Hero Award, was presented by trustee Sharon Rounds to utility supurvisor Lester Lehew for saving the life of a fellow employee who was choking. Lehew performed the Heimlich maneuver and was able to dislodge the blockage.