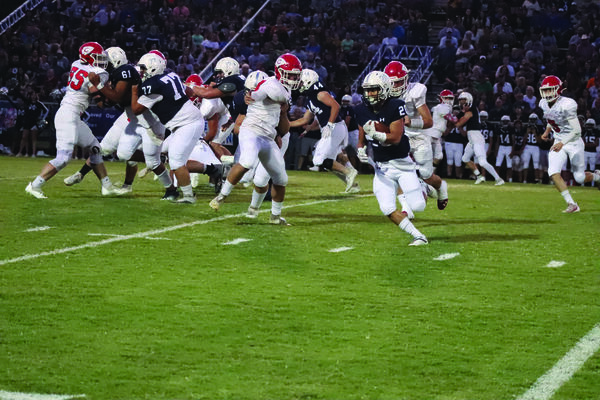 The Comanche Indians fought hard for four quarters but could not overcome the Marlow Outlaws in the district opener last Friday, falling 36-0.

The stats were close to even. Marlow finished with 300 yards of total offense to Comanche’s 289. The Indians had a huge time of possession advantage, holding the ball 35 minutes of the 48-minute game.

Comanche, though, could not find the end zone in three trips to the red zone.

The Indians had drives of 17 plays and 21 plays that ended with no points on the board. The Outlaws, who scored at least one touchdown in every quarter, were able to score quickly on their touchdown drives.

“I felt like we moved the ball and we matched up well on both sides of the ball as far as the stats go,” said Casy Rowell, head coach. “We just couldn’t figure out a way to seal the deal in the red zone. We got a tough break on some of the stuff and we have to figure some stuff out as a staff and figure out as a team.”

Rowell went on to say that Marlow did a good job of being prepared for whatever the Indians threw out them defensively.

There were two big touchdown plays for the Outlaws in the first quarter as running back Julian Marroquin scampered from 37 yards out on the Outlaws’ first possession.

Later in the quarter, Marlow quarterback Jace Gilbert hit receiver Will Bergner in stride on a trick play to push the lead to 14-0.

In the second quarter, the third Marlow touchdown of the night was setup by a pass play that both Bergner and Comanche defensive back Devon McCarty came down with.

Officials ruled it a catch and it would lead to a 20-yard touchdown run by Cole Hayes and a 21-0 halftime lead for the Outlaws.

Comanche senior Bryson Evans had a solid game for the Indians, rushing for 50 yards on six carries and catching nine passes for 96 yards. Quarterback Kooper Doucet completed his first seven passes of the night before finishing with 184 yards on 16-of-22 passing.

Possibly the most heart-wrenching play of the night for the Indians came in the second half when the Indians drove down to the Marlow three. Doucet attempted to score on a sneak and tried to stretch the ball across the goal line. But before Doucet would get the call for a touchdown or be called down, Bergner stripped the ball and ran the other way with it that would eventually lead to Marlow’s final touchdown of the night.

It will not get any easier this week for Comanche when they host Davis.

“We really don’t have time to sit back and lick our wounds,” Rowell said. “We’re going to have to get ready right now against a tough team that is hot right now and they are a team that I haven’t had a chance to beat since I’ve been coaching.”

“They’re pretty predictable every year as far as their wishbone and triple option,” Rowell said. “They kind of sell out to that, running 90 to 95 percent of the time. They make you try to stop their power run, and the past couple of years we’ve come close, but they’ve done a real good job of controlling the clock and winning the fourth quarters.”

It will be the second home game in just five weeks for the Indians.

“Davis, and some of these teams like Frederick and Lindsay, we’re getting those guys at home and I think that is really big for us, because I really believe we can still win out,” Rowell said. “This is an important game for us to try to get some momentum back that we had.”