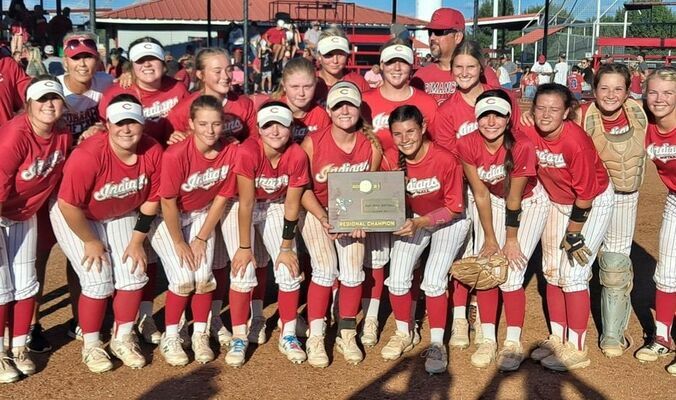 It was worth the wait.

After enduring rain delays and venue changes over four days, the Comanche Lady Indians finally punched their ticket to the state tournament with an 8-3 win over Chisholm on Saturday.

“We’re just excited,” said Aaron Minor, head coach. “It’s just there was a moment where they just clicked and we got off and running.”

After picking up wins over Jones, 11-2, and Bethel, 8-1, on Wednesday, the rains came and wreaked havoc on the tournament. Determined to get the games in, Comanche coaches worked the field Saturday morning in order to get it ready to play.

“As far as the delays, we thought we were the best team in this regional, so there was just anxiety and wanting and being ready to play because we knew we could beat them,” Minor said.

The game was tight in the early going with a pitcher’s duel between Comanche’s Kamrey Rendon and Chisholm’s Macie Andrews. Through four innings, the game was tied at 1-1.

The Lady Indians had managed just two hits through the first four innings. Their only run came in the third inning when Raylee Chaney tripled and came home on a sac fly by Mykayla Slovak.

Chaney was the only hitter not to struggle against Andrews at any time in the game. She went 3-for-3 and was a home run short of the cycle. She scored twice and drove in three runs.

After seeing Andrews two times, the Lady Indians began to make adjustments and it paid off in a major way as they would score seven combined runs in the fifth and sixth innings. Seven of their nine hits in the game came in the final two at-bats.

“She had us off-balance for four innings, but I’m telling you, one through nine (in the batting order) we’re pretty good hitters. They can adjust and we fought her off and battled through it until right there in the fifth inning.”

In the top of the fifth after the Longhorns scored to take a 2-1 lead, the Lady Indians would come back in the bottom half of the inning. Caity Ramsey walked and Brighton O’Connor hit a ball deep to left that hit off the fielder’s glove, putting runners on second and third. Chaney then doubled both runners home giving Comanche the lead for good at 3-2. Slovak followed with a double that scored Chaney to push the lead to 4-2.

Chisholm scored again in the top of the sixth to cut the lead to 4-3, but the Lady Indians would break the game open in the bottom half of the inning. Comanche ripped off five straight hits by Jentry Whaley, Aspen Loafman, Ramsey, O’Connor and Chaney. Ramsey and Chaney had RBI singles, while O’Connor had a drove in two runs with a double.

In the top of the seventh, the game ended when Rendon coaxed all three batters into infield pop-ups, which included a diving catch by O’Connor at third base for the first out. She also recorded the third out in foul territory that sent the Comanche players in the dugout rushing out on the field to celebrate.

The Lady Indians have now won 12 straight games and head to Thursday’s state tournament with a 25-10 record and momentum.

“That moment when we lost to Davis here…I’m telling you from that moment, something just clicked and we are playing well right now,” Minor said. “We’re just hitting the ball so well right now.”

It was announced at the game it is the first trip to the state tournament for Comanche softball since 1989. Minor said they are going to enjoy the moment, but will also get back to work.

“We’re happy to be there, and we will be ready and prepared for whoever we play in the state tournament on Thursday, but we’re going to enjoy this for a couple of days,” Minor said.

For senior Caity Blair, she has been on some good teams, but never one that was able to get over that regional tournament hump.

“I think it’s just our bond as a team,” Blair said. “We’ve come so close this year and worked hard. I think we just really love each other and work hard.”

It was also special for her to see her team win the right to go to the state tournament in her last game on the home field.

“It’s crazy, it’s just unbelievable,” Blair said. “I never would have thought this could happen. I’m so proud of my team, so proud.”