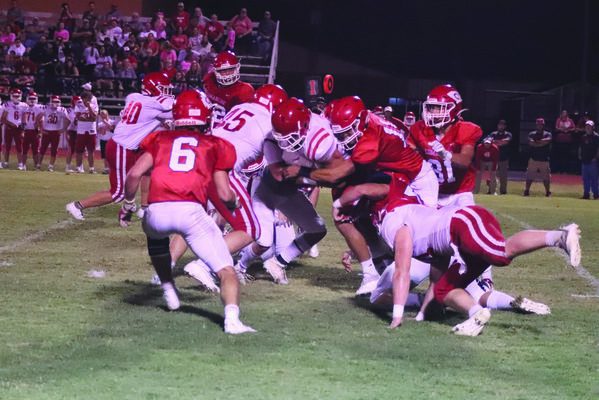 The Comanche Indians find themselves in an 0-2 district hole after falling to Davis at home last Friday night in a low-scoring 14-6 affair.

The Indians had problems in the red zone for the second week as they had two turnovers inside the 10-yard line. Comanche had three turnovers in the game, compared to none for Davis.

The Wolves got on the scoreboard in the first quarter following a long 70-yard run that set up the score. Only a great hustle play by Mason Kulbeth coming from the backside kept the running back out of the end zone.

That would be all the scoring through the first three quarters. Both teams moved the ball, amassing more than 300 yards of total offense, but the defenses kept their opponents out of the end zone for most of the contest.
Both offenses were just 1-of-6 on fourth down attempts and had just a 33 percent success rate on third downs.

Two interceptions and a fumble by Comanche kept the Indians out of the end zone and Davis led 8-0 at the half.

After a scoreless third quarter, Davis pushed the lead to 14-0 in the fourth quarter.

The Indians didn’t give up, however. They drove down the field and quarterback Kooper Doucet capped off the drive with a 12-yard scramble to get in the corner of the end zone. The two-point conversion attempt failed and kept the score at 14-6 with just under four minutes to go in the game which still gave Comanche life.

The onside kick was unsuccessful and Davis was able to run a couple of precious minutes off the clock before having to punt. Comanche’s offense would run out of time before they could get in the end zone again.

The Indians will regroup and head to Marietta as they start the second half of the regular season.

Marietta has struggled this year and sits at 0-5. They have been shut out in three games and have been outscored 102-28.

The teams do have a common non-district opponent. Both have played Healdton with Marietta losing by a 28-8 score, while Comanche won by a 35-14 score.