Incident at middle school leads to arrest of student 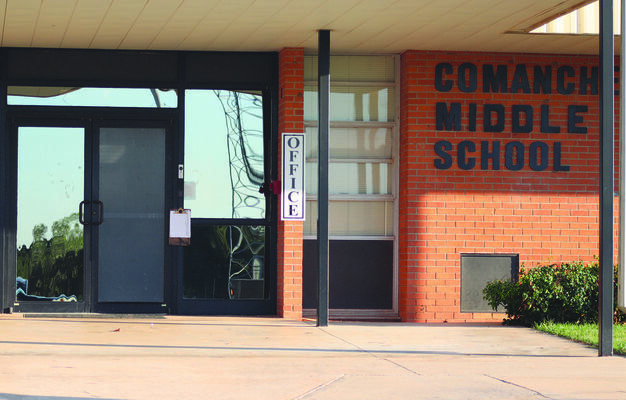 A Comanche teenager was arrested after shooting his way into the Comanche Middle School building late Friday afternoon.

According to a Comanche police report, around 4:45 p.m. the alleged suspect shot the glass on the front door of the building and entered the building.

A lone employee at the school went to investigate the loud noise when he spotted the alleged suspect. The employee retreated to the cafeteria and called police.

Officer Ronnie Branch responded to the call. He arrived on the scene and upon entering the building, spotted the suspect who surrendered without further incident. Additional law enforcement arrived and the building was cleared to make sure there were no additional suspects in the building.

The juvenile’s mother was then called to the scene and the suspect was taken to the police station for questioning.

Under questioning, the suspect allegedly told police he had gotten the gun from his mother’s safe and had gone to the school building to harm a staff member, who he claimed falsely accused him of smoking in the boys’ room. He was also fed up with fellow students telling him he was nothing.

The suspect was taken to the Oklahoma Juvenile Detention Center in Lawton. Charges are expected to include second degree burglary, breaking and entering, and two counts of threats/intimidation.

An investigation revealed two .22 caliber slugs in the office door and another slug had penetrated into a clock inside the main office. There were also two unspent rounds and four casings found at the scene.