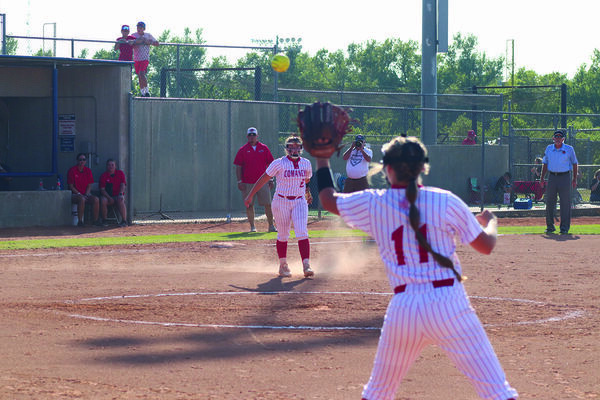 me early-game jitters in the school’s first state softball playoff appearance in 32 years as they fell behind eventual state champion Washington early and never recovered in a 10-0 loss.

“Making it to state is something this team can be proud of,” said Aaron Minor, head coach. “Yes, it stings right now, but years down the road they can look back with pride knowing they are only the second group from Comanche to do this.”

The Lady Indians could only muster two hits in the game, both coming in the first inning. Mykayla Slovak singled and moved to third on an infield single by Caity Blair. After Blair stole second, Slovak strayed too far off the bag at third and was picked off for the final out of the inning.

It would be as close as Comanche would get to getting on the scoreboard.

Things did not get any better in the bottom half of the first inning. Three errors on defense led to three Washington runs.

“I could tell during warm-ups that we were nervous,” Minor said. “I just think we were overwhelmed and it showed. We are a fairly decent defensive team and to have that many errors, that’s something you can’t do against a team like that.”

The Lady Indians kept the game close for the next three innings, keeping the lead at 3-0, but Washington broke the game open in the bottom of the fifth with four runs and then followed it up with three more in the sixth to end the game.

After the first inning, Gracee Miller was the only other player to get on base for Comanche as she was hit by a pitch.

Kamrey Rendon was the losing pitcher. Only four of the 10 runs scored by the Lady Warriors were earned.

Still, there was still plenty to be positive about for the Lady Indians. They only lose two seniors, Caity Blair and Maddison Hare, which could bode well for Comanche in the near future.

“We will miss those seniors,” Minor said. “Caity is tough as nails, one of the toughest players I’ve ever had and she will be hard to replace. Then you’ve got Maddi where she didn’t get a whole lot of playing time her first three years and then she gets in the line-up her senior year. There’s something to be said for that because a lot of kids will just check it in if they’re not getting playing time. She stuck with it and it paid off for her and she was a big piece of this. Their positivity is what was the difference was on this team than in years past.”