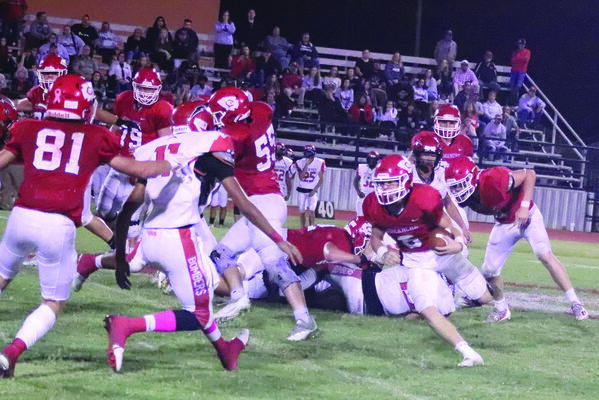 It was a homecoming that may be talked about for years to come.

Down 23-0 at halftime, the Comanche Indians stormed back in the second half behind senior Bryson Evans to pull off an unlikely 34-29 comeback victory over Frederick last Friday.

“This team’s known for the dramatic,” said Casy Rowell, head coach, with a laugh. “I guess with it being homecoming we had to add some twists. Even near the end when Owen (Bigford) got that penalty (that set up the Bombers’ final touchdown that made the score 29-26 in Frederick’s favor), I think he did that to set up a little bit of extra drama so that we had to comeback with one minute left.”

It was a game of highs and lows for the Indians. Comanche did not play well in any facet of the game in the first half.

“At halftime, I come into my office to collect my thoughts for a couple of minutes to make sure I don’t say something I regret,” Rowell said. “We went back out there with a calm head and knew what we needed to do. Our eyes weren’t very disciplined in the first half on defense. We were back on our heels instead of our toes and we were kind of getting caught halfway between blitzes. Their quarterback did a great job of dropping back and getting rid of the ball.”

Then Evans switched from slotback to quarterback on offense. He started the third quarter by throwing a 12-yard touchdown pass to Kooper Doucet, who was the quarterback in the first half, and was now playing receiver.

“We’ve always had two styles of offense that we’ve been working on ever since we’ve had this group and the other style wasn’t working, so we felt like we had nothing to lose,” Rowell said. “It ended up being a great call because something just got into Bryson that night and he was possessed out there. It was exciting and we’re all really excited right now. Bryson brought a spark to the team and it almost feels like a new season right now.”

While Evans may have been the catalyst, he definitely had the help of his teammates. Mason Kulbeth made a spectacular catch on a third-and-long in the fourth quarter that set up Comanche’s third touchdown that cut the lead to 23-18. With a defender draped on his right arm, Kulbeth managed to twist his body and make a one-handed catch with his left hand as he was falling down backward.

On Frederick’s next possession, Kulbeth picked up a fumble and returned it to the Bombers’ 5-yard line where Evans would take it in to put the Indians on top for the first time in the game by a 26-23 score with 10:02 left in the game.

Later in the quarter, however, Frederick retook the lead on a 27-yard run that put the Bombers’ ahead 29-26.

The Indians still had a little magic left.

Moving quickly down the field to the Frederick 27, Evans rolled out and hit freshman Colby Shannon on an out-and-up for a touchdown, a similar play that beat Lone Grove game in week three.

“Yeah, it was pretty much the same play,” Rowell said. “We kind of looked at each other and said they must not have watched the Lone Grove film. We disguised it a little bit with our formation and they jumped on the slants.”

Rowell had total faith that the freshman would be able to step up big in the situation.

“We were nervous when it was in the air, but he’s one of those kids that doesn’t think too much about the situation or overthink things,” Rowell said. “I think he seriously just looked at it as just another ball in the air and thought ‘I’m going to catch it,’ and he did. I think now he’s starting to realize how big of a catch it was.”

With the win, the Indians still have a shot at finishing as high as second in the district, which would mean a first-round home game in the playoffs. They could lock up the No. 2 seed by winning their final three games and have Davis lose one more along the way.

Rowell said he wants to make sure his team does not look past Tishomingo this week after such a big win last Thursday.

“We’re trying to take it one game at a time,” Rowell said. “You have to go out and play if you want to win and we don’t want to take anything for granted.”

It will be the last road trip of the regular season for the Indians, who close out the final two district games at home against Coalgate and Lindsay.