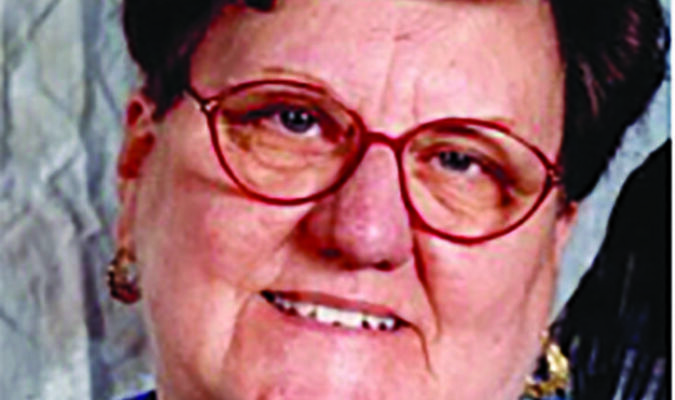 Interment followed in the Fairlawn Cemetery at Comanche. (Due to Covid concerns, the family requests that those attending the service please wear a mask out of courtesy to members of the Funkhouser family who are immunocompromised.)

Paulette was born Jan. 16, 1941 near Weaver’s Chapel, east of Comanche. She was the second child of Oscar Edward and Dorotha Dean (Robeson) Morgan.

At the age of 5, Paulette started school at Oak Cliff southwest of Comanche, skipped the 3rd grade, and graduated from Comanche High School in 1957 at the age of 16. She attended Draughn’s Business College in Oklahoma City before withdrawing to care for her parents following her mother’s cancer diagnosis. Paulette’s mother and the mother of a nearby eligible bachelor began conspiring to get the two of them together, and on February 8, 1958, she and Bobby Dean Funkhouser were married in Comanche. Cupid just needed a little help! Two children soon followed...Lisa Renae in August 1959 and Gregg Darin in April 1961.

After both children were in school at Grandview, Paulette first waitressed at Chisholm Trail Restaurant in Duncan and then took an office job at B&B Nursing Home in Comanche. In 1968, she went to work at Bud Brown Insurance in Comanche and later for Wayne Sledge Insurance Agency in Duncan. In 1973, Bobby and Paulette opened Bob’s Electric in Comanche where Paulette answered the phone, kept the books, and took payments for Arkla Gas and the phone company. From 1980 until retiring in 2012, she worked as church secretary at Comanche First Assembly of God, later Praise Assembly.

Paulette was a doer, and she was in her element working and serving at the church. Besides working in the office, she was also the “Card Lady” sending over 300 cards a year for birthdays, anniversaries, family losses, and special events. Paulette also had a beautiful alto voice and sang in a women’s trio for a number of years.

Paulette had no patience for crafts, sewing, or decorating, but she loved working in the yard and garden...her stress reliever! A late fall Saturday afternoon would often find her harvesting pecans down on Dry Creek with an Oklahoma University football game blaring over the pickup radio! She would much rather mow the yard than vacuum the floor, and grass burrs were her declared mortal enemy! She was also a voracious reader...but nothing that made her think too hard!

Although Paulette never played sports herself, she was an avid fan and spectator...especially when her children and grandchildren were in school. She took great pride in making sure Gregg’s football pants were bleached bright white which helped her easily pick him out on the football field! She whooped and hollered for the Oklahoma Sooners and later enjoyed rooting for the Oklahoma City Thunder.

Lifelong residents of the Comanche area until moving to Duncan in 2017, Bobby and Paulette resided southwest of Comanche on the farm Paulette’s parents purchased in the mid-1940’s. The couple were members of First Assembly of God/Praise Assembly for over 50 years, and during that time, Paulette played the piano for a multitude of services, helped prepare thousands of fried pies, mailed out thousands of cards, conquered her nemesis the computer (sort of), greeted folks and hugged lots of necks, and loved serving the Lord by serving others.

Paulette is survived by her husband, Bobby, of the home, a daughter, Lisa Ingle and her husband, Rome, of Broken Arrow; a son, Gregg Funkhouser, and his wife, Robbie, of Jacksonville, Fla., and two grandchildren, Steffen and Savannah Funkhouser, of Jacksonville...a great source of pride for Paulette. She was preceded in death by her parents, brother, Lee Edward Morgan, four half-brothers, Leon Morgan, Herman Morgan, Boyd Morgan, Stacy Morgan, and a half-sister, Gail (Morgan) Knudsen.

Memorial contributions may be made to The Gideons International at https://www.sendtheword.org/ for the purchase and distribution of Bibles around the world.