Offense explodes in rout of Tishomingo, 62-22 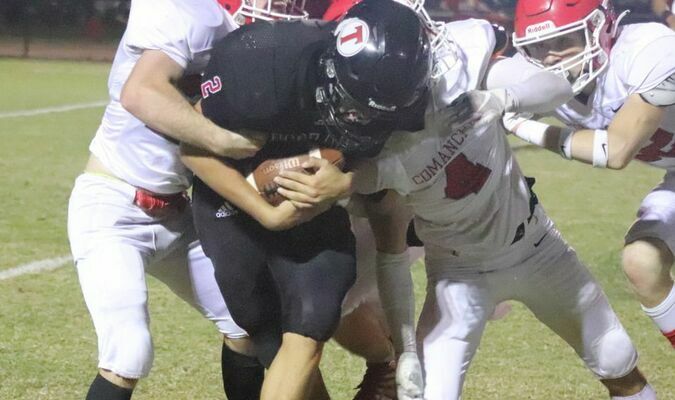 The Comanche Indians played a near-perfect game on their way to a 62-22 win over host Tishomingo last Friday.

Tucker Oliver scored four touchdowns, all in the first half, and finished with 124 yards rushing in the win.

Comanche stayed mostly to their ground game, only throwing a handful of passes, but thanks in large part to the offensive line, the Indians amassed 302 yards on the ground.

“In the first half, we went out and got after them,” said Casy Rowell, head coach. “We made some pretty awesome plays on defense and offense. We ran the ball well and the defense had some turnovers.”

They also had a punt return for a touchdown. In the fourth quarter, a Tishomingo punt only traveled about three yards. Senior linebacker Owen Bigford snatched it out of the air after the first bounce and ran 23 yards for the score.

Oliver scored on runs of 6, 5 and 10 yards, in the first quarter and then added a 36-yard touchdown run in the second quarter as Comanche built a 27-6 halftime lead.

Oliver’s teammates got involved in the scoring in the second half. Quarterback Bryson Evans scored on a 6-yard run; Colby Shannon caught a 22-yard touchdown pass from Evans; and Kooper Doucet ran in from 10 yards out as Comanche built a 48-12 lead heading into the final quarter.

With the win, Comanche improved to 6-2 overall on the season, doubling its win total already from last season. They are 3-2 in the district and tied for third with Lindsay and Davis. Frederick is alone in second with a 4-1 record in district, but plays at Marlow this week.

Barring a major upset in the next two weeks, Marlow should win the District 2A-4. The Indians have a shot of finishing second and hosting a first-round game by winning their final two games and with a Davis loss either this week or next week.

Still, there are four teams vying for three spots, which will mean one of those teams will be on the outside looking in after next week’s games.

“I feel like we are in a perfect situation because we got (both games) at home, and that’s going to be huge,” Rowell said. “What more could you ask for? It’s pretty exciting and it just shows how tough our district is. It could be worse. We could be playing away and the teams we are playing (Coalgate and Lindsay) could be different. We feel like those are two games we can win. We just need to take them one game at a time and then go from there.”

Coalgate (2-6, 1-4) does not have an impressive record, but they have been in most games until the end, playing Frederick, Davis and Lindsay within a touchdown, and Rowell knows they are not a team to be overlooked.

“They’ve definitely got a lot of respect from a lot of teams and we see that they are on the rise and we don’t take them for granted,” Rowell said. “That’s a team that I know would like to rain on our parade and just like any other team we want to take care of business and take it one play at a time and one quarter at a time. That’s a team we're not definitely overlooking.”