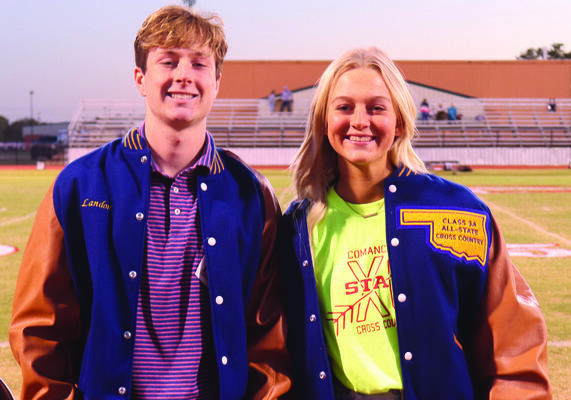 The Comanche cross country teams wrapped up their seasons at the Class 3A State Meet held in Edmond last Saturday. The Lady Indians brought home 10th and the Indians finished fifth.

“Almost all the boys reached new personal records,” said Jason Miller, head coach. “We did well. I was really proud of both teams.”

For the fourth straight year, Jaylee Miller and Landon Ellis medaled, marking the end of a pair of remarkable careers for the seniors. Miller finished 12th in girls, while Ellis finished fifth in boys.

“It was bittersweet,” said Jaylee Miller. “I’m excited that its over because I’m ready for track and its sad because I put in so much work the past eight years. I was kind of sad the closer I got to the end because I knew it was over.”

She won state her freshman year, so it put a lot of pressure on her to do well every year.

“My freshman year was definitely my best year,” Miller said. “I was just trying to keep that same mentality going through the whole thing and not just settle down because there was so much pressure on me because I did so good as a freshman.”

She’ll also miss being teammates with Ellis as they grew up in the sport together.

“We’ve been running for so long together and I’m pretty sure he is going to college for it and he has just worked so hard,” Miller said. “I know he did really good this year, but it’s sad we’re not going to be able to run any more together.”

Another bittersweet thing for Miller was being able to run for her dad, who also happened to be the coach.

“I was really sad that he won’t coach me anymore in cross country,” Miller said. “He was harder on me than the others because I was his kid, but I loved having him as a coach.”