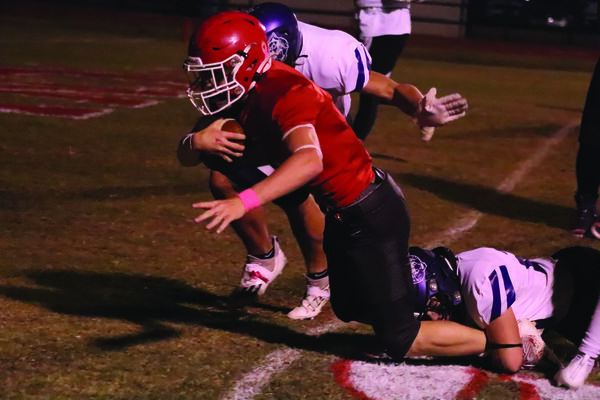 The Comanche Indians played so well against Coalgate, they even surprised their coaches a little bit in a 45-20 win.

“Our offense really exploded against a really quality team,” said Casy Rowell, head coach. “I think a lot of us were thinking it was going to be a little bit closer game than it was. Then from that first drive when we took the ball down the field and scored in just a few plays, it was exciting.”

The Indians had their highest offensive output of the season with more than 500 yards of total offense with almost 380 of it coming on the ground.

“That’s the most we ever had,” Rowell said “We’ve been consistently scoring over 40 points the past four weeks with the exception being Frederick where he had over 30, so that’s pretty dang impressive.”

All seven Comanche touchdowns came on the ground with junior Tucker Oliver leading the way with four, followed by Bryson Evans with two and Kooper Doucet with one.

With his 150-yard performance, Oliver went over the 1,000-yard mark with one game left in the regular season. He has scored 17 touchdowns while averaging 6.8 yards per carry.

Rowell attributed his success to a few things this season.

“He does three sports, which helps and this past summer, he was working out twice a day,” the coach said. “He was lifting in the mornings and working on his footwork in the afternoon. He’s gotten bigger and stronger. It’s not a surprise to us that he has been able to do this.”

Comanche built a 12-0 lead in the first quarter before Coalgate cut the lead to 12-6. With just under nine minutes remaining, Evans broke through the line on a quarterback keeper from the Coalgate 30, ran about 10 yards, fumbled the ball and without missing a step, scooped the ball back up as it bounced right back into his arms. He then ran the rest of the way to get the touchdown. The Indians would go on to take a 26-14 halftime lead.

Kooper Doucet put the final points on the board with a four-yard run that pushed the lead to 45-14. Coalgate added another score with time winding down to make the final, 45-20.

The Indians, who have won four in a row, have a huge matchup against Lindsay in the final game of the regular season.

“Oh, it’s definitely exciting,” Rowell said. “I also don’t want to put any more on it than what we have put on any other game all year long. I feel like we’ve been on an even keel each week, and I don’t want to make this week into something different. I think as long as the boys are excited and ready to play, it’s going to be fun.”

The Leopards’ strength, according to Rowell, is in their passing game.

“They’ve got a real good quarterback,” Rowell said. “I feel like we can stop the run and I think we can stop the pass because  we’ve played a lot of good teams like Frederick that have a really good passing game. I just think it comes down to being ready to go and not taking anything for granted.