Comanche falls to Lindsay, but still heads to playoffs 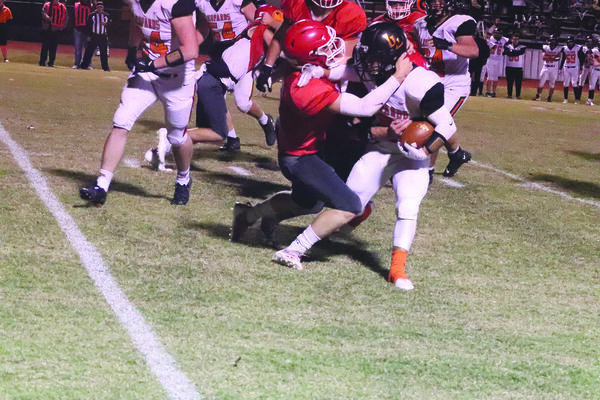 Comanche had its four-game winning streak snapped in its regular-season finale against Lindsay, 32-15, last Friday night but the Indians still reached their goal of making the playoffs.

The Indians finished the regular season, 7-3, their highest win total in more than five years.

Comanche had a chance to host its first playoff game since 2005 with a win over the Leopards, if Frederick beat Davis, but neither happened. Davis’ win over Frederick, however, did guarantee the Indians a spot in the playoffs with Comanche grabbing the No. 4 seed. They will travel to play at Washington this week in the first round.

Against Lindsay, Comanche never was able to get its offense rolling like it had during the winning streak. A week after gaining over 500 yards of total offense against Coalgate, the Indians were limited to less than 200 against Lindsay.

The Leopards won the battle at the line of scrimmage, bottling up Comanche quarterback Bryson Evans and running back Tucker Oliver.

When Lindsay had the ball, they were able to find success on the ground and grind out some long drives.

Comanche did get some big stops in the first half, which allowed them to stay within striking distance for most of the game.

The Leopards scored late in the first quarter to take a 7-0 lead. The Indians responded on their next possession, scoring less than three minutes later on a 4-yard touchdown run by Oliver.

Lindsay would answer right back just over two minutes later on a 33-yard touchdown pass that would allow them to take a 14-7 halftime lead.

The Leopards took control in the third, scoring on their opening drive of the quarter on a long drive, followed by a long 65-yard touchdown run on their next possession to push the lead to 26-7.

Comanche got back on the board when Evans went on a quarterback sweep around left end, found a crease and took off for an 83-yard touchdown run, the longest touchdown play for Comanche this season.

That score cut the lead to 26-15 following Evans’ two-point conversion.

That would be as close as the Indians would get, however. Lindsay put the game out of reach halfway through the fourth quarter on a three-yard touchdown run by Broty Ramming.

As the saying goes, “To be the best, you have to beat the best.”

Comanche will get that opportunity in this week’s first-round playoff game when they travel to take on Washington. The Warriors are ranked No. 1 in the state, meaning the Indians will have played the top two teams in the state this season in Washington and Marlow.

The Warriors are averaging 49 points per game while opponents average 7.4 points per game. Washington has not allowed an opponent to score since Oct. 14 when Lexington scored on a safety for its only points.

The Warriors have had one close game, a 13-10 decision over Community Christian, who ended up finishing second in their district.

Comanche is no stranger to playing at Washington. The Indians played the Warriors in a first-round playoff game in 2019 with Washington taking a 45-13 win.