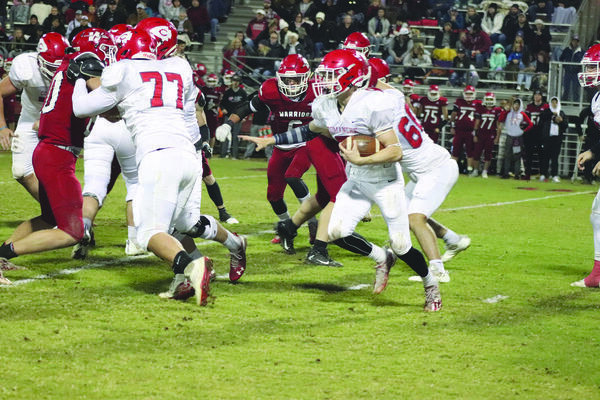 Washington scored three touchdowns each in the first and second quarters to build a comfortable 42-0 halftime lead. The Indians fought to the end and scored three times in the second half to score the most points the Warriors have given up to any team all season.

Tucker Oliver scored on a one-yard run in the third quarter for the Indians’ first score. In the fourth quarter, Kooper Doucet scored on a two-yard run and quarterback Bryson Evans connected with Colby Shannon 38-yard touchdown pass.

“We’ve still got to understand if we want to be deep into the playoffs and realize there’s a lot of work outside of football season that needs to be done, during the offseason, during the summer, where we can really get ourselves prepared,” said Casy Rowell, head coach. “Then we have things like wrestling and basketball that start and we have coaches like me and (Connor) Kelly that are working with junior high part of the day in one sport and the high school in another.”

Rowell said it was important to the coaches that they concentrate on both.

“The last thing I want someone to think is that I’m ready for the season to be over,” Rowell said. “I’m always prepared to cancel our first couple of (wrestling) meets. That’s my goal is to have to cancel all those events and not show up until Christmas time to train and get ready for the wrestling season.”

The key, Rowell said, was to prepare for the long haul.

The Indians finished 7-4 overall, the best record they have had in several years.

The goal, now, Rowell said, is to develop some consistency. They had some memorable wins against Lone Grove and Frederick, but did not perform as well in losses against Davis and Lindsay.

“It was nice finally crossing that bridge by beating Lone Grove and Frederick, but we still haven’t done that yet against Lindsay and Davis,” Rowell said. “I think we had opportunities to do that and it just didn’t happen. I think it shows what a tough district we have. Frederick was one of the best teams we played and they didn’t even make the playoffs.”

Rowell said he got a glimpse of how good the Warriors were in the early going when the quarterback evaded a sack, threw into double coverage and his receiver came down with the ball for a big gain on the opening drive.

“As a coach you just try to put your players in the best position to be successful,” Rowell said. “There were a lot of times where we were in position and they did some stuff that kind of made you scratch your head a little bit. At the same time, you have to play with a certain level of intensity when you play a team like that. There have been games where our intensity level has been high. Consistency is the hardest thing and probably the most important thing to being a champion. Pacing yourself throughout the season, but also being able to not give away games that maybe you could have won.”

Even with the loss, the coach is proud of his team’s accomplishments this season.

“These kids did some amazing stuff,” Rowell said. “They’ll always be special because of this senior group. They’ve crossed a lot of bridges that no one thought they could and they proved a lot of people wrong along the way.”

Rowell said the seniors have laid down a foundation to be built upon by those who follow.

“It’s kind of just expected now that we will be in the playoffs,” Rowell said. “It’s huge to have expectations like that now and I just hope some of these younger guys learn from what they are seeing.”