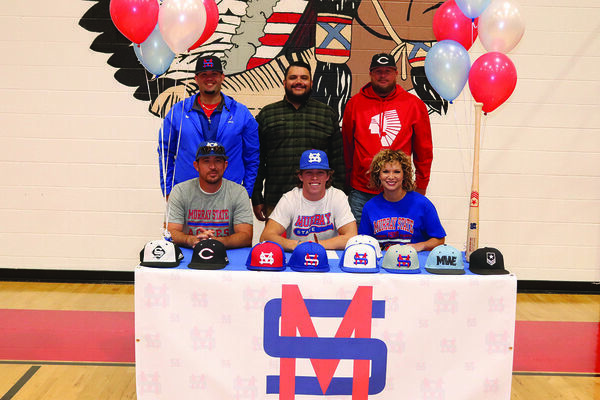 Bryson Evans has been a successful and outstanding multi-sport athlete over his high school career. Last Friday, the Comanche senior chose to further his athletic career playing baseball by signing with Murray State College in Tishomingo.

“It’s been a dream of mine for a long time (to play college baseball),” Evans said. “I’ve worked toward this for pretty much every summer in my life. I spent all my time putting my soul into playing summer baseball and it kind of feels good to get it off my back.”

Evans made his commitment to Murray State this past summer after visiting the campus and meeting with coaches and players.

“I really liked the coaches there,” Evans said. “I saw them play a squad game and the players played well and I could tell they were well-coached. The guys on the team really seemed to enjoy it, so I kind of made my decision there, right in that moment.”

Evans said he likes the campus and the ballfield.

“But, really, it came down to the coaches,” Evans said. “I talked to everybody and they loved it. They said the coaches work them hard but they enjoyed every minute of it.”

He was also looking at Seminole State and Eastern Oklahoma State. He had also talked with a few other schools.

“Those were kind of my three options,” Evans said.

He also said it was nice to have the commitment out of the way during the summer so he could enjoy playing sports his senior year without the added pressure of having to decide on a school.

“It was nice for football season and not having to worry about anything and I could just enjoy the scenery,” Evans said. “It was something that was talked about a lot, so it was good to get it off my chest and enjoy the rest of my senior year.”

Murray State pitching coach Justin Eclavea was in attendance and is excited about getting Evans on campus.

“I really like his style of play,” Eclavea said. “He plays with a lot of aggression and grit. He’s very blue-collar and that’s the type of style we look for at our program. He’s very talented and has a lot of tools. He’s good at getting the bat on the ball and he has the ability to run and get the baseball.”

The coach said he could see Evans playing a number of positions at Murray State.

Eclavea thinks that Evans has the ability to crack the starting lineup as a freshman.

“Absolutely, we wouldn’t have offered him what we offered if we didn’t think he couldn’t come in and contribute right away,” Eclavea said.