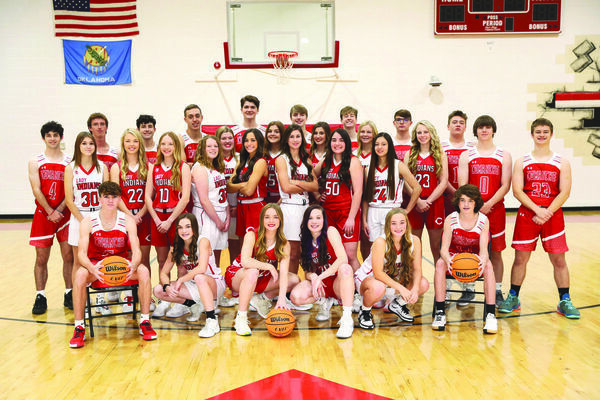 e into the 2021-22 season with high expectations under second-year coach Megan Robbins.

“It’s been good so far,” Robbins said. “I wouldn’t say it has been easier this year, but I think there’s just a little more familiarity between the girls knowing what I expect and what we’re going to run and that type of thing.”

Robbins said it was a little rocky the first year with the team learning a new system, but now everything seems to be running smoother.

“We’ve got a really solid group I feel coming back that really likes to get after it,” Robbins said. “They want to get up and down the court. They want to push the pace and that’s the way I like to coach so it makes it that much more fun for both of us.”

She said the team seems excited to get the season started.

“I think its nice for them to have the year they did in softball and to have some carry over some of that energy into our sport,” Robbins said.

Comanche lost four seniors to graduation, two of which were regular starters and the other two gave the Lady Indians depth off the bench.

Robbins feels she has some players that can help fill those roles.

“We had a group of girls last year that were freshmen and just got to sit back and watch a little bit,” Robbins said. “It got them some experience, but also gave them a year to grow into their roles. and I think they are ready to step in and fill in some of those shoes.”

This year’s team has two seniors, Caity Blair and Brianna Keeling, who Robbins said help set the tone at practice with their leadership. Blair was a starter at guard last season.

“All those girls, they’ve been around and they’ve seen the success and they’re willing to work hard and I think that helps to set the tone for the younger ones,” Robbins said. “We’ve got a ton of freshmen and I think it might be a little difficult for some of those girls to make the transition to high school. I think it’s going to take them a little longer to figure it out, but they’re doing a good job so far.”

The Lady Indians went 15-9 last season and had their ups and downs. They once had a six-game winning streak, but struggled near the end, losing their last three of four, and suffered a one-point loss in the regional tournament consolation to end their season.

“I think that just comes from the craziness that was last year,” Robbins said. “With me being gone in the beginning of the season (due to maternity leave) and being a new coach in general, there was just a little bit of chaos last season. I think this year’s a little more calmed down. They know what to expect. They know what we are going to run. They know what looks we’re looking for and what we’re trying to execute while we are out there.”

The practices themselves have been upbeat.

“They know what our team goals are,” Robbins said. “They have them printed up in our locker room so they can see those all the time.”

Now, the coach is excited to see what this year’s team can do.

“Overall, I’m really excited for the year to see what they can do and how they develop,” Robbins said. “I think we’ll just continue to get better as the season goes.”

Comanche falls to Lindsay, but still heads to p...