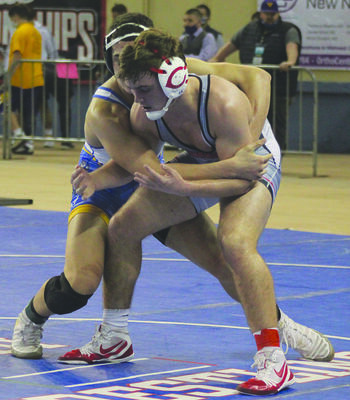 The Comanche Indians return five qualifiers, including two state placers, to head up this year’s team as they begin their quest to the state tournaments.

“Every year is different than the year before,” said Casy Rowell, head coach. “We’ve come in here and we’ve had a lot of days where it’s been kind of free training if that’s what you call it. We’ve come in and worked on some things and then given them the freedom to work. What we are looking for is who is motivated and who’s not and who’s willing to work hard on their own and who’s not.

And, the wrestlers have responded.

“It’s been going surprisingly well,” Rowell said. “We’ve got a lot of guys who are really self-motivated, that are pushing themselves and then that’s going to pay off in the long run if they keep that attitude.”

The Indians have several tournaments lined up as well as a tough dual schedule.

“They’re definitely going to find out where their weaknesses are and work on those things and develop their strengths,” Rowell said. “I can see us competing at the end of the year and maybe surprising some people.”

The success of the past couple of seasons, especially the state championships in 2020, can be both a good and a bad thing depending on the wrestler, according to the coach.

“It’s a good thing because we know its possible and we know that with hard work and dedication, commitment, all those things you can go get a state title,” Rowell said. “But, also, with some of the younger guys, they need to know that they’ve got to go earn it. Nothing is going to be given to us. I think sometimes you expect to keep winning, which isn’t a bad thing, but you’ve got to back up those expectations with the dirty work.”

Realizing it is a different year will help instill that mentality.

“They’ve got to understand this is a new group, a new lineup, a new team and if they want to go put themselves up there with the top teams, some of these state championship teams, some of the best teams we’ve had at Comanche, they’re going to gave to pay the price,” Rowell said.

“We’ve got a lot of experience with those guys,” Rowell said. “Some of them were a part of that state championship team a while back so they know what it takes. So, I’m hoping their leadership will help with some of the younger guys coming in and so far it has. I think we’ll be just as competitive as we were last year, if not more.”

The girls’ program has been picking up steam with most in the junior high ranks.

“We had a bunch come in and try it and found out it was not what they expected, but we just talked to them to come in and try something new,” Rowell said. “I really appreciate Dilynn and Keith Hare for coaching and working with them. She’s done an awesome job of managing those girls.”

Comanche opens the season next Tuesday at home against Elgin. Youth wrestlers start at five, followed by the girls and junior high boys at 6 p.m. The high school will follow the junior high.

There’s a lot of work involved, but Rowell is excited about the season.

“I can pretty much flip in anything I do,” Rowell said. “I can’t help it. I get obsessive and get into it. With wrestling, it could just be one practice where I see a kid do something right and or get better from the previous day or better from last year and that could be the one thing that fires me up for the whole week. I can find ways to get myself motivated and inspired by watching these kids every day. That makes it easier when you’re around people that actually want to be here and you don’t have to make them be here.”