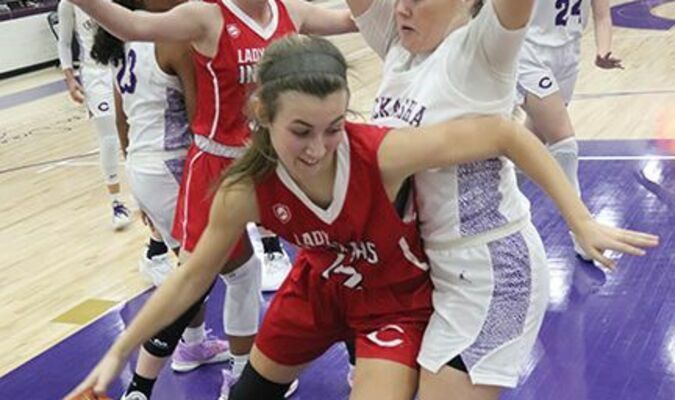 The Comanche basketball teams are now two games into the season heading into this week’s tournaments at Latta.

Last week, the teams split with Fort Cobb-Broxton and Chickasha.

Lady Indians off to 2-0 start

Comanche picked up a couple of lopsided wins to open the season with a 66-29 win over Fort Cobb-Broxton last Tuesday and a 43-15 win over Chickasha on Friday.

“I think we are doing pretty well,” said Megan Robbins, head coach. “We still have a long ways to go, but I think they’ve bought into our system and understand what we’re looking for. Not only are they trying to execute what we are running but they’re doing a lot of the little things.”

Robbins said the defense is leading to the good offensive output.

“They’ve really bought into that and locked down on defense,” Robbins said. “They are trying to do a better job of pressuring other teams and making it to where we can get out and run a little bit more on offense.”

Against Fort Cobb-Broxton, Comanche held a slim 15-13 lead at the end of the first quarter, but outscored the home team 19-6 in the second quarter to take a commanding halftime lead on their way to the win.

Gracee Miller scored 20 points to lead Comanche. Caity Blair was next with 14 points. In all, nine players scored for the Lady Indians.

Against Chickasha, the Lady Indians sprinted out to a 15-0 lead before the Lady Chicks scored their first points in the second quarter. Comanche went on to take a 26-5 halftime lead.

Kylie Roden knocked down three three-pointers in the contest on her way to a team-high 11 points. Gracee Miller was next with 10 points.

After falling to perennial state title contender Fort Cobb-Broxton in the opener, 39-26, the Indians lost a heartbreaker in overtime, 49-42, to Chickasha.

“I feel pretty good after both games even though they were losses,” said Caleb Patterson, head coach. “In the last game, I thought we competed better than we did the first night. I feel like we’re in a good spot heading into the Latta tournament.”

Against Chickasha, the game went back-and-forth throughout the game. There were nine ties and six lead changes before the Chicks took control in overtime.

Comanche led 7-4 at the end of the first quarter before settling for a 17-17 tie at halftime. It was a slow start for both teams. Landon Ellis’ basket at the 4:52 mark was the first score by either team.

The game stayed close throughout the third quarter before Comanche took a 31-29 lead into the final quarter.

The Indians led by as many as five points in the fourth quarter before Chickasha came back to tie the game and the teams traded the lead for the rest of the quarter.

With time winding down, Landon Ellis found himself at the free-throw line with his team down 38-37 with just a half-second left on the clock. Ellis made the first to tie the game, but missed the second to send the game into overtime.

The Chicks then took control in overtime with some excellent free-throw shooting going 9-for-9 to pull away. Mason Kulbeth scored twice in overtime for Comanche’s only points in the extra period.

Both teams travel to Latta for tournament games this Thursday. The Comanche boys play Petrolia, Texas at 12:20 p.m. and the Lady Indians play Lindsay at 1:40 p.m.