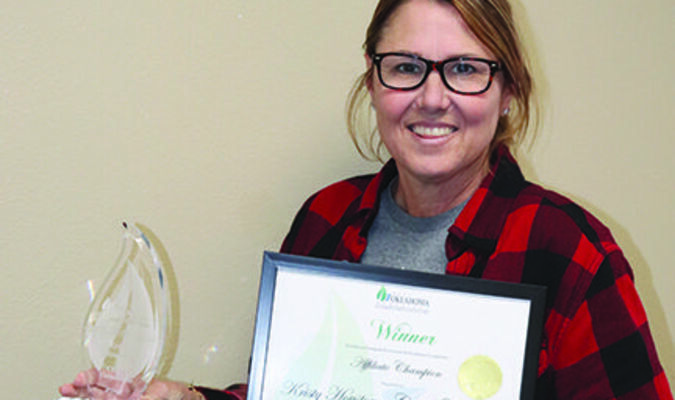 Kristy Houston of Comanche can be seen at home football and basketball games leading her cheerleading squad to pick up trash. Her cheerleaders also have won five straight Comanche Trash-Off competitions hosted by the city annually.

For her efforts, Houston was recently recognized as an Affiliate Champion at the annual “Keep Oklahoma Beautiful” environmental awards, given to deserving people selected from nominations across the state.

“Kristy Houston is a huge asset to the Comanche community,” Ralls said in his nomination letter that was read at the awards banquet in November. “Under her leadership, the Comanche High School cheerleaders go above and beyond to keep Comanche clean.”

During the past five years, the cheerleaders have collected more than 240,000 pounds of trash.

“Kristy leads by example, motivating her ladies to contribute to the beautification of Comanche,” Ralls said.

Houston said she was surprised to have received the award.

“We are servants of the community and it is just the right thing to do,” Houston said. “It’s nice, but it is such a shock to have won the award.”