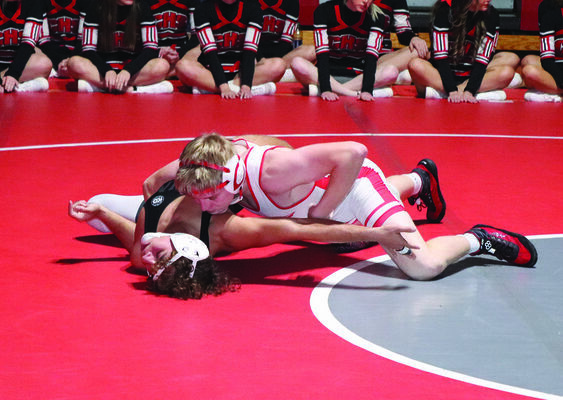 The Comanche wrestling team had a busy week with two duals and a big tournament over the weekend.

Last Tuesday, the Indians fell to visiting Elgin, 43-29, in a match that was full of momentum swings.

The Owls started off the night with a 22-0 lead only to see Comanche come back to score 23 straight points to take a 23-22 lead. Elgin then came back and outscored Comanche 21-6 in the final matches to get the win.

With Comanche down 22-0, the Indians got big wins from Jacob Billingsley, Gunnor Yates, Noah Presgrove, Logan Bain and Tucker Oliver to get their team back in the match. Presgrove and Bain picked up falls to help spur the comeback.

The Indians did bounce back against Cache a couple of days later, taking a 49-21 win before heading off to the Mid-American National Finals in Enid, where they competed against some of the top teams in the country before finishing 16th out of 35 teams.

“We wrestled a lot of matches,” said Casy Rowell, Comanche head coach. “I think some of those guys got like close to 10 matches through the weekend. There were some good moments, but there was some disappointments, too. I realize it was just our first tournament and a lot of those other guys have already been in a couple of tournament and those make a difference.”

Rowell said one of the major things the team learned was to go on the offensive and stay on it.

“I learned that watching these guys that are the best out there that they are always on the offense,” Rowell said. “They don’t give you a second to breathe out there and you’re spending your time blocking and countering because the other dude isn’t giving you a second to think.”