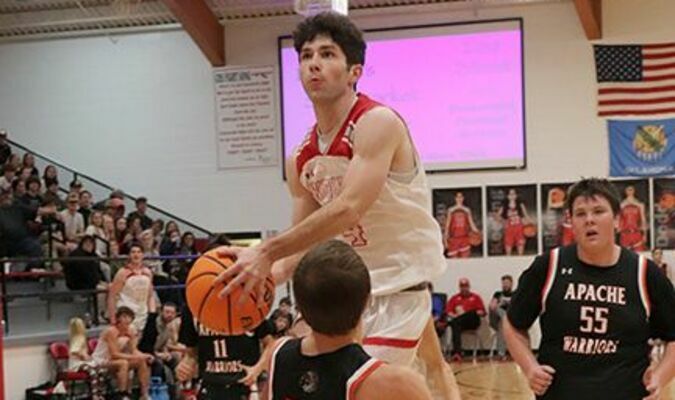 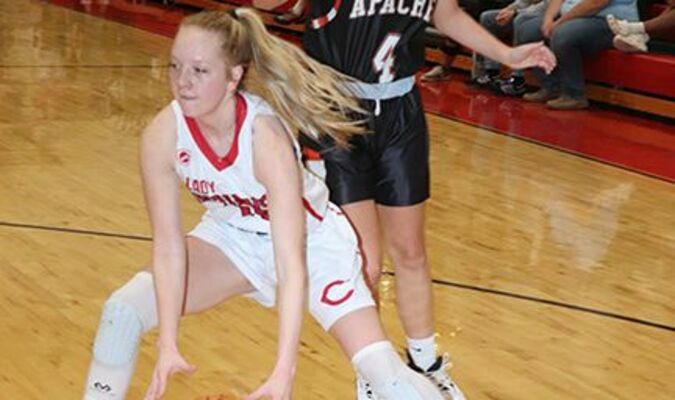 The Comanche basketball teams opened their home schedule with a pair of wins over visiting Apache on Dec. 14.

The wins came about in two different ways as the Lady Indians took control early and cruised to a 60-24 win, while the Indians' game went down to the wire in a 50-45 win.

Both teams will play in the 2022 Charles K. Heatly Classic in Lindsay beginning Jan. 6. The Lady Indians, the top seed will play Lone Grave at 3:20 p.m. The Indians will play top seed Crooked Oak at 4:40 p.m.

Comanche used its pressure defense to set up its offense as the Lady Indians jumped out to an early lead. Comanche surrendered just two two-point field goals in the entire game with the majority of Apache's points coming from behind the arc and at the free-throw line.

Led by Gracee Miller and Caity Blair, who combined for 14 of the team's 19 points in the first quarter, the Lady Indians took a 19-7 lead heading into the second quarter.

Comanche spread out the scoring a little more in the second, but the result was still the same with the Lady Indians outscoring the visitors 17-5, to take a comfortable 36-12 halftime lead.

Comanche kept up the pressure in the third, extending its lead by outscoring the Lady Warriors 18-5 to take a 54-17 win into the final quarter.

Miller had a game-high 21 points to lead a group of 10 Lady Indians who found their way onto the scoreboard. Kenley Lemons was second on the team with 10 points. Blair, Keira Pineda, Kamry Rendon and Kynli Morris all had five points each. Kylie Roden finished with three, followed y Brilee Combs, Bri Keeling and Breelie Garlinger with two points each.

There were three lead changes and two ties throughout the contest, including a 45-45 tie with 1:54 to go in the game before the Indians scored the final five points of the game to get the win.

Both teams hit stretches where they found it hard to score and neither team's lead was ever more than five points at any point in the game.

Apache led 11-9 at the end of the first quarter, but Comanche rallied back in the second, limiting the visitors to just six points and the Indians took a slim 20-17 halftime lead.

The game remained closed throughout the second half. Comanche post player Jeremy Crisp who did not score in the first half, found his touch in the third quarter, knocking down a three-pointer and two more field goals to score half of his team's 14 points to keep his team ahead.

The Indians took a 34-30 lead into the final quarter, but the Warriors took the lead briefly before Landon Ellis took it back for Comanche. The Indians managed to hold the lead until with just under two minutes to go the Warriors tied it at 45 on a steal and lay-up.

It was a well-balanced scoring effort for the Indians, who improved to 2-4 on the season. Five players finished between nine and 11 points led by Myles Ellis with 11. Mason Kulbeth was next with 10 points followed by Landon Ellis, Dilon Ellis and Crisp with nine points each. Blayden Cook added two points and Corbin Bowen had one point.