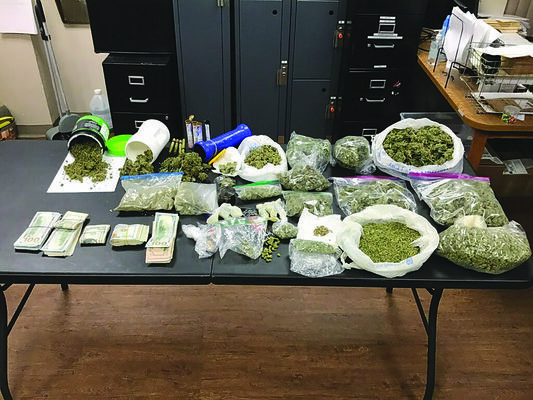 Three women were charged with drug possession with intent to distribute following a traffic stop in Comanche on Dec. 19.

According to an affidavit, Comanche police officer Jesse Claytor was in the parking lot of City Hall when saw a vehicle heading southbound on Highway 81 that clocked 47 mph in a 35 mph speed zone shortly after 6 p.m.

The driver provided the officer with a United States re-entry permit and the passengers provided passports. Claytor smelled alcohol coming from the vehicle and the driver, who was the only one who allegedly could speak English, said one of the passengers had been drinking.

According to the affidavit, Claytor also could smell raw marijuana and when asked if there was any in the vehicle, Theppharaj said she did not know and also advised they were marijuana trimmers.

Claytor radioed for backup and detective Ronnie Branch arrived on the scene and he also notified the sheriff’s department.

After Branch’s arrival, the suspects were placed in police vehicles while the officers conducted a search. During the search an open can of beer was found along with another cup containing an alcoholic beverage. Several containers of marijuana were found along with a marijuana grinder, rolling papers and several pre-rolled marijuana cigarettes.

He also said anyone transporting marijuana legally would need a license to transport and none of the suspects had a license.

According to the affidavit, several thousand dollars in cash totaling nearly $14,000 was also found in bags in the vehicle.

One of the women said she felt faint and after an ambulance arrived to check on her, the three women were taken to the Stephens County Jail where they were booked on the intent to distribute charge and for having open containers of alcohol.

Straily said his department has put in a forfeiture on the cash seized in the stop. The police chief said that if the suspects are found guilty or make a plea deal that the police department has a good chance of getting the assets, though it is not guaranteed.