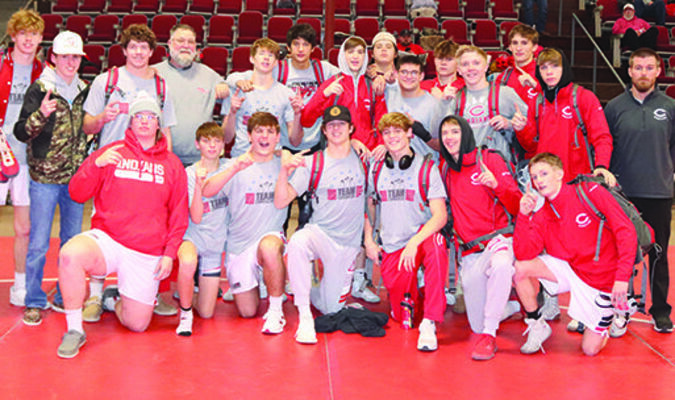 The Comanche wrestling team has been on a bumpy road this season, but they proved one thing on Thursday afternoon - the district road to Dual State still runs through Stephens County.

The Indians went a perfect 5-0 in dual matches at the Class 3A District 5 tournament held at the Stephens County Fairgrounds in Duncan.

"We definitely had to come out here and had some stuff to prove because Plainview is up higher in the rankings than us and it kind of felt like we were getting overlooked a little bit," said Casy Rowell, head coach. "We were seated as low as 11th this year, but if you look at our schedule, you'll see that we don't shy away from the competition. Yeah, we've been taking some butt whippings, but we're wrestling the best teams in the state, the best guys in the state."

He said it caused his team to want to prove that they are still a formidable opponent.

"(Our wrestlers) showed up today," Rowell said. "They handled business and they were ready and I'm real proud of them and was impressed on how they performed."

The closest match was a 54-25 win over Plainview in the opener. The Indians also picked up wins over Mangum, Sulphur, Davis and Anadarko.

Comanche wrestlers record at the dual, not counting forfeits (pins in parenthesis):

Dual State will be held at the Stride Bank Center in Enid on Feb. 11-12.