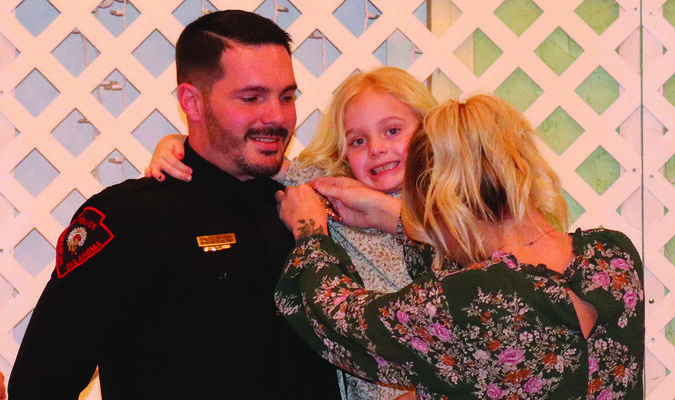 (Editor’s note: This is second in a series on getting to know Comanche police officers.)

Ronnie Branch he did not like police officers while growing up in Duncan.

“They used to show up at our house a lot,” Branch said. “I looked to them for help but they never really did anything. They didn’t give me a safer situation at home when it was obvious what needed to be done. When I started to think about how I wanted to help people, I thought about law enforcement, I wanted to be one of the ones who showed up and actually did something. I’m not a big fan of writing tickets and doing traffic stops. I’m more into answering calls and helping people.”

When he was a young man, he got into logistics and traveled a lot for work. It was then when the itch to switch to a career where he could help people began.

Branch got his start in law enforcement as an unpaid reserve at Healdton.

“Since I had my foot in the door, I went ahead and applied for full-time positions,” Branch said. “I came here and had a few interviews and after a lengthy process they gave me a shot. And that was in July 2019.”

Branch was promoted to sergeant and detective in February, and he is finding out he is enjoying the new positions.

“Being a sergeant in a small department is not such a big deal,” Branch said. “I have a couple of guys under me, but really, we all help each other with anything anybody needs help with. I originally pursued detective for the same reason, just to build a resume. I found I really enjoy it. I like the mental work of it, tracking down leads, finding the suspects. It’s just a lot of fun and it achieves a goal I set out to do in the first place. You really get to help people that way.”

There are definitely times when it can get mundane in a small town, but that also can change in a hurry.

“More times than not, things aren’t too terrible in Comanche,” Branch said.

He want on to describe the shooting incident after school at Comanche Middle School last October when he was two hours from going off shift in what had been a calm day up until that point. Next thing he know he gets a call and he suddenly found himself springing into action.

“Everything was quick and everything turned out okay and no one was hurt, but you never know,” Branch said.

He said the biggest surprise has been having to work alone at times, especially now when several officers are still in the academy.

“You may find yourself in a fight for a long time before help shows up,” Branch said. “The county backs us up, but they only have a couple of people on shift at a time and they could be anywhere in the county. We have reserves, but dispatch has to get a hold of them and then they have to get dressed and come to the scene, so it may take a while. It opened my eyes quickly that I might have to defend myself pretty hard for a while before help arrives.”

He has enjoyed working under the police department leadership including chief Bill Straily, assistant chief Cory Faulk and former assistant chief Michael Moore. He also likes the people he currently works with.

“We learn from each other,” Branch said. “For example, Jesse Claytor is a reserve that is coming on after academy, but he has a lot of experience. Even though I’m the sergeant I’ve learned a lot from him. People bring in different types of experiences even in a small department.”

Local man arrested for lewd acts to a child