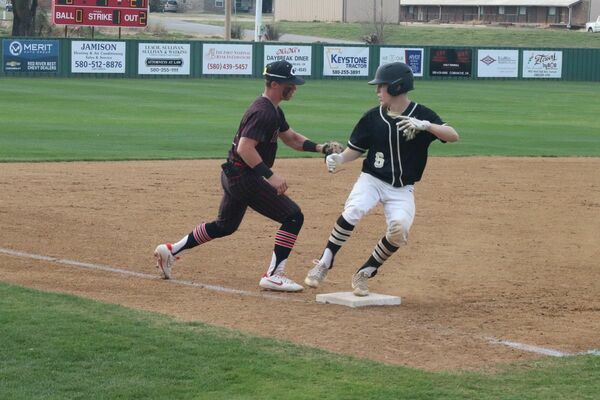 The Comanche Indians picked up a pair of key district wins with a sweep of Marietta on Tuesday, winning both in blowouts.

Comanche improved to 12-4 overall and 4-0 in District 3A-2 moving into a first-place tie with Washington. Those two teams meet next Monday at Washington and then Tuesday at Comanche. They could also meet up this weekend at the Marlow Tournament though it will not count toward the district race.

The Indians pounded out 10 hits, received nine walks and were helped by 12 Marietta errors in the contest.

Senior Bryson Evans made his first home run at Comanche's field a memorable one, hitting a grand slam. It was his sixth career home run.

Evans was not the only Comanche player to go long in the game as Ian Essex also belted a homer. He added triple for good measure. Both players drove in five runs in the game.

Essex was the winning pitcher, tossing three innings, striking out four, walking three and giving up no hits.

The game turned out much like the first with Comanche scoring in every inning. Ian Essex hit his second home run of the day in the contest and finished 2-for-3 with two RBI in the game.

Essex was not the only one with a good offensive game, however. Landen Steele went 4-for-4 with a double and drove in three. Gunner King went 3-for-4 with a pair of RBI, and Bryson Evans, Gabe Diaz and Dillon Ellis all had this with RBIs.

Steele was also the winning pitcher, giving up two hits, striking out five and walking none in two innings pitched.