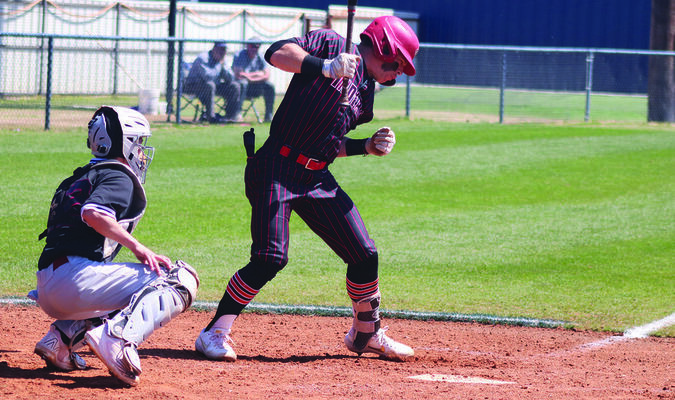 The Comanche Indians went 1-2 at a tournament in Marlow last week. One bad inning in both losses proved to be the difference before the Indians were able to bounce back in their final game on Saturday.

The game was tied through five innings, but FC-B, ranked second in Class B, broke the game open in the bottom of the sixth with four runs to take the lead for good.

The Indians took a 1-0 lead in the top of the first when Bryson Evans led off the game with a double and later scored on an error.

Fort Cobb-Broxton (13-1) would get the run back in the bottom half of the inning.

FC-B would take the lead for the first time in the bottom of the second, following a two-out error by Comanche that led to back-to-back hits and a run scoring.

The Indians would retake the lead in the top of the fourth on a 2-RBI single by Brady Dobbins.

FC-B would then tie the game again in the bottom of the inning when a single and three straight walks led to the tying run crossing the plate.

Comanche had a chance in the top of the sixth when the Indians had runners on second and third with one out, but back-to-back strikeouts ended the threat.

Fort Cobb-Broxton would take advantage of their opportunities in the bottom half of the inning. FC-B had tied the game at 4-all when with two outs a triple was followed by a walk sandwiched between a pair of singles and then an error that opened the gates for Fort Cobb-Broxton.

Comanche got one run back in the top of the seventh, but it would not be enough.

Evans, Gunner King, Ian Essex, Gabe Diaz and Dobbins all had one hit to lead Comanche with Evans and Essex getting doubles.

King took the loss on the mound.

The game started out well for the Indians. Pitcher Owen Bigford had a perfect game through three innings and a no-hitter through four.

Comanche would then score its first run in the bottom of the fourth when Landen Steele scored on an error.

The lead would be short lived, however, as back-to-back singles and two errors led to three runs for MSM.

Comanche got one run back in the bottom of the fifth on an RBI double by Ian Essex that scored Bryson Evans.

Mount St. Mary put the game away in the top of the sixth, taking advantage of two walks, a hit by pitch and two errors that would eventually lead to seven runs.

Essex’s double was the only hit for the Indians in the game.

Bigford ended up with the loss on the mound.

The game started with a marathon first inning before settling down.

Landen Steele and Ian Essex had singles in the bottom of the first as part of an 8-run inning for the Indians.

Comanche would add three more runs in the bottom of the third for the only runs after the first inning. Essex hit a two-run homer in the inning. He collected four RBIs in the game to lead the Indians.

Gabe Diaz was the winning pitcher, tossing three innings before being relieved by Brady Dobbins for the final three innings.