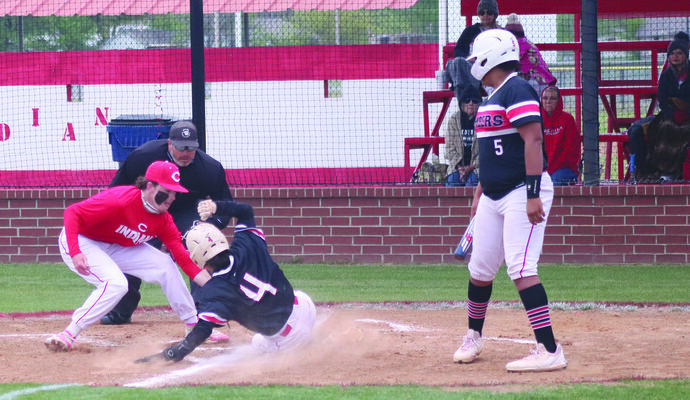 The Comanche Indians are getting hot at the right time as the postseason closes in. After losing to district front-runner Washington early last week, the Indians have rattled off three straight wins to put themselves in a tie with Lindsay for second place in District 3A-2.

Monday, the Indians knocked off Community Christian at home, 14-2, to improve to 20-10 on the season, a win total usually considered a good goal to reach.

“It means you’ve won a good amount of games,” said Jarod King, baseball coach. “We’ve played a pretty tough schedule. I mean, we’ve had our ups and downs, but I think 20 wins is pretty good, especially with a new coach, new players, different expectations and everything. We’ve done pretty well.”

A win at Community Christian on Tuesday and a loss by Lindsay to Washington would give the Indians the district runner-up spot outright. Otherwise, it will go to tie-breakers. It is important, King said, because the top two seeds in each district should host bi-district tournament games and be paired with the No. 7 seed from the other district. In Comanche’s case, that would be District 3A-1. Heading into Tuesday, Blackwell was the No. 7 seed with a 5-18 overall record. The No. 6 seed is Hennessey with a 6-16 overall record.

The Indians can finish no worse than third in the district.

Against Community Christian, Comanche batted around the order in the first three innings as they steadily built a lead.

Comanche starting pitcher Owen Bigford had a solid outing on the mound. He gave up a first-pitch home run to start the game, but settled down and would not allow the Royals to cross the plate again until the fifth inning when the game was already well in hand.

“Owen’s been pitching well all year,” King said. “Our pitching was not a bright spot early. We had a lot of walks, but Owen has thrown the ball consistently. He’s come out of nowhere. At the beginning of the season he wasn’t one of our district pitchers and now he is the district pitcher.”

Bigford was helped by a solid defensive performance behind him as the Indians committed no errors in the game when errors were another problem earlier in the season.

“We’ve been playing pretty good defense,” King said. “Before that it wasn’t good, but here lately we’re kind of getting it going. So, it does feel like we have some momentum going toward the end of the regular season and that’s what you want to do. I think playing a tough schedule has helped with that because we’ve been tested a little bit. But right now is the time you want to be playing better or you should be playing better.”

A vested interest in Ukraine