Condict returns to Comanche to speak at FCA banquet 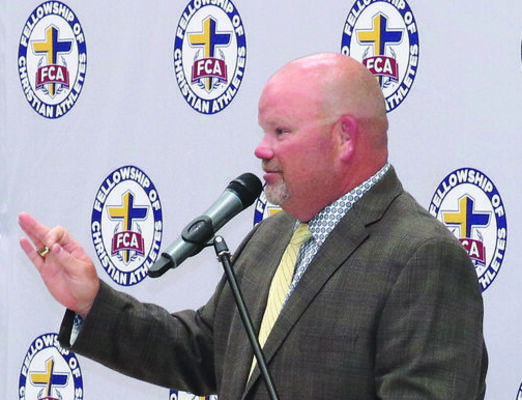 Condict talked about his time at Comanche and the relationships that he built along the way before leaving to be closer to family at Wagoner.

“They had nothing,” Condit said of the team when he arrived in Wagoner. “The environment in the school was awful. The first time I get the team together, I looked around and said ‘I’m not here to rebuild the program, I’m here to win right now.’ And they bought into that the first year I was there.”

After a losing season the year before, Wagoner made it all the way to the state title game. They lost that game, but it set the tone for the program.

He went on to talk about games and championships, but also talked about his personal life about when his father and his son had cancer at the same time.

His father would eventually pass away and his son would recover, but Condit said he learned a lot during that time.

He spoke about how important it is to go after dreams.

“I think sometimes we sell ourselves a bit short of what we are capable of,” Condit said. “It doesn’t matter if you are coaching or whatever it is that you do. The power of God works in those that believe. God takes us above and beyond anything we can imagine independently. God’s bigger than my reality. He is able to do more than all we know. A lot of you have your own challenges. If you haven’t had them yet, they’re coming. We are all going to face whatever challenges , but we can receive the confidence that comes from God.”

Several awards were given out at the banquet.

She also presented a special award to Comanche FCA sponsor Jack Francis for all his efforts in making the program successul.

A special Walk of Faith award was given to Brighton O’Connor by the Simpson family in memory of former Comanche Elementary School teacher Linette Simpson, who passed away earlier this year.