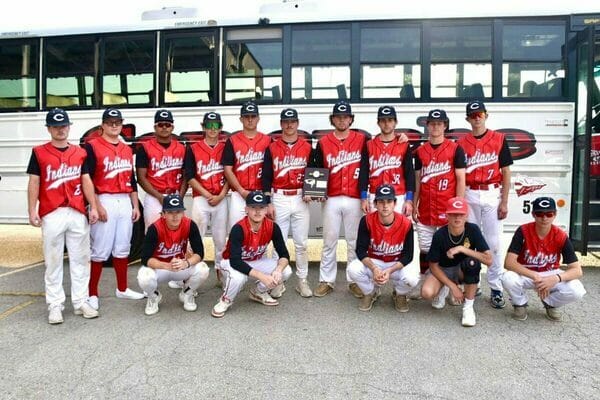 The Comanche Indians kept their season alive by sweeping Blackwell at the Bi-District Tournament in Blackwell last Thursday. The Indians had no problem with the Maroon, winning the games by football-type scores, 14-0 and 21-7 in five-inning games.

The Indians now advance to the Class 3A Regional Tournament at Metro Christian in Tulsa beginning today (Thursday). Metro Christian, the top seed, will open the tournament against Davis at 11 a.m. Comanche and Bethel will follow at approximately 1:30 p.m.

The winners of those two games will play at 4 p.m. for the right to advance to the championship game at 6:30 p.m., Friday and would await for the loser’s bracket games to shake out. The “if necessary game,” would be Saturday at 2 p.m.

The Indians went with “Plan B,” with the “B” standing for Bryson and Bigford. Bryson Evans took care of the offense and Owen Bigford took care of the pitching as Comanche scored in every inning on their way to the win.

Evans finished a double short of the cycle and blasted two home runs in the win, going 4-for-4 with six RBI. He homered in his first two at-bats and hit the wall on his third at-bat for a triple.

Bigford had a solid outing on the mound and was backed up by an errorless defense. Bigford gave up just two hits and issued just one walk in four innings of work. Evans came on in the top of the fifth to close out the game on the mound by striking out the side.

The Indians scored two runs in the first inning, five in the second, six in the third and one in fourth.

Gabe Diaz went 2-for-3 with 2 RBI. Owen Bigford, Brady Dobbins and Colby Shannon all had doubles with Bigford and Dobbins driving in two runs each.

The Indians pounded out 22 hits on their way to the win. Comanche scored nine runs in the top of the first to take the game under control in the early going.

Comanche scored six runs in the second inning, and six in the fourth.

The Indians got a little too relaxed defensively after building a 15-1 lead after two innings, committing six errors in the game, which allowed the Maroon to get some runs across the plate. Blackwell scored one run in the first and third and then added two more in the fourth and three more in the fifth.

Ian Essex, Gabe Diaz, Dillon Ellis, Brady Dobbins and Colby Shannon all had three hits in the game. Bryson Evans and Landon Steele had two each. Owen Bigford, Ethan Morris and Coalton West each had a hit.

Shannon had a home run in the game, Evans had a triple and Essex, Diaz, Steele and Dobbins all had doubles.

Diaz started the game on the mound and pitched two innings, giving up one hit and an earned run while striking out four and walking one. Steele, Morris and Lucas Gordon each pitched an inning to close out the game.