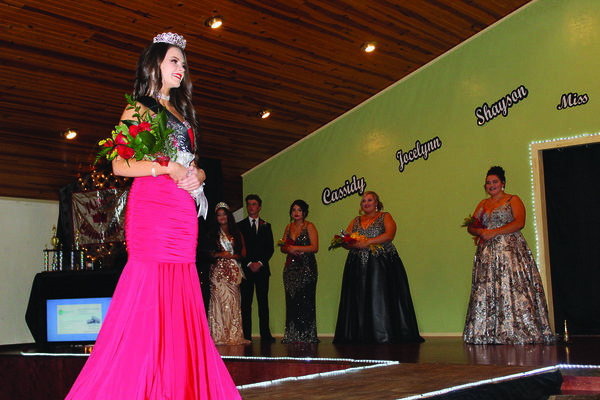 Mystik Palmer was crowned the 2020 Miss Comanche at the Asbury Complex in Comanche last Saturday. More photos on page 8

The 34th annual Miss Comanche Pageant finally was able to be held after a few postponements due to the COVID-19 pandemic.

At the end of the night, Mystik Palmer was announced as the 2020 Miss Comanche winner by mistress of ceremonies Micah Foraker and crowned by outgoing 2019 queen Mekayla Ralls, who found her reign to last about a year-and-a-half.

Palmer, a sophomore, is the daughter of Roger and Tasha Watters. She won three individual categories, taking Best Casual Wear, Miss Photogenic and Miss Talent at the event held at the Asbury Complex in Comanche.

For her talent, Palmer danced to the Elvis Presley classic, “Jailhouse Rock.”

Marissa Chandler, a senior, was named first runner-up. She is the daughter of Teri and Fred Bauch and Zach and Sandi Chandler.

She sang the Dixie Chicks’ song “Travelin Soldier” as her talent.

Rodriguez, a senior, sang Hillsong’s “Sinking Deep,” as her talent. She is the daughter of Leroy and Michelle Rodriguez.

She is the daughter of Andi Williams and Kole and Cindy Williams. She also won the Anna Lisa Clark Memorial Scholarship by writing the winning contest essay.

Shayson Hodges, a senior and the daughter of Jason and Jennifer Hodges, won Miss Congeniality. She performed a monologue titled, “Cap’n Crunch and 2% Milk,” as her talent.

She is the daughter of Melissa Tilley and Jerad Thompson.

Escorts for the evening were Bailor Harris and Reece Middick.

Old hotel is getting new look