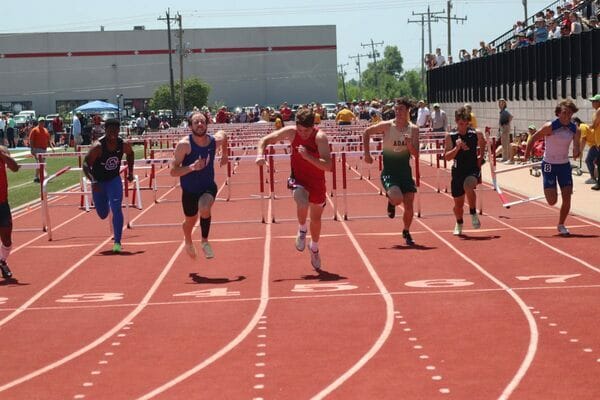 Logan Bain had not run track in three years. The Comanche junior had been playing baseball the past few years but he decided to get back on the track this year.

It turned out to be a good decision.

Bain won the 110-meter high hurdles at the Class 3A State Track Meet held at Western Heights High School in Mustang by the slimmest of margins on Saturday. After qualifying second in Friday's preliminary, Bain edged Clark Free of Oklahoma Christian by one-hundredth of a second in the final, propelling himself to the top of the medal stand and a state championship with a time of 15.24 seconds.

"I knew he could do it," said Jason Miller, head boys track coach. "I'm not surprised at all even though he hasn't run in three years. He already had the form and technique down and he can jump and run."

For his part, Bain admitted to being nervous but was confident in his ability.

"I felt like I had a chance," Bain said. "I was nervous but I had a lot of adrenaline and I took off with a good start and I had a good finish. That's all I can ask for."

Bain said his timing was a little off in Friday's prelims, but everything fell into place for him on Saturday.

"Yesterday, my timing was off, but today it was on target," Bain said. "It's nice to win a state championship. My mom's (girls coach Misti Bain) said I should just stop doing baseball and come to track. I finally did it and it paid off."

Bain also made the final in the 300-meter hurdles where he finished fifth with a time of 41.32 seconds.

Bain and senior Landon Ellis combined for 28 team points, which was good enough for the boys' team to finish in ninth place in the standings.

Ellis, running in his last state track meet came tantalizingly close to a couple of state championships himself. He finished third in the 3200 meters on Friday, just two seconds behind first place and then narrowly missed out on winning the 1600 meters on Saturday by less than a second with a time of 4:32.52. Oklahoma Christian School's Ethan Stovall won the race with a time of 4:31.56. His time of 10:00 in the 3200 meters was a personal best.

It was still a great way to end a stellar high school career for Ellis, who finished in the top 10 at the state cross country meet all four years. He will be running track and cross country for Oklahoma Christian next year.

"I'm very proud of Landon," Miller said. "These races get more competitive every year. I just told another coach that if we ran that 1600-meter race 10 times, we might have 10 different winners. That's how close the competition was. He fell short of what he wanted. He wanted that first."

Ellis was near the front of the pack for the first three laps. On the fourth lap, it became a foot race in the last 100 meters between him and Stovall with Stovall managing to out-sprint Ellis to the tape.

"People don't understand how hard it is to run that mile," Miller said. "They think those mile kids are slow, but I don't care what anybody says, I think he's the fastest kid in our high school even over short distances. You will just not beat his work ethic."

The day also marked an end for another senior with an impressive resume. Jaylee Miller, who won a state cross country championship as a freshman, finished eighth in the 300-meter hurdles in her final state race.

Also in the boys' 300-meter hurdles, Noah Presgrove, a sophomore, narrowly missed qualifying for the final as he placed 10th in the prelims with a time of 42.87.

In other girls' state competitions, Brilee Combs, a freshman, finished 12th in the 1600 meters. Another freshman, Karsynn Bowles finished 15th in the 3200 meters. Alayna Nichols, a sophomore, finished 10th in shot put. Brooklyn Walden, a junior, finished 14th in the long jump.