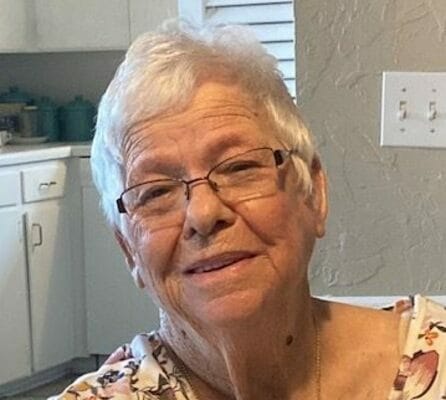 Ringling - Funeral services for Shirley Ann McCartney will be held at 2:00 p.m., Tuesday, May 10, 2022 at the Alexander-Gray Funeral Home in Ringling with Rev. Joe Taylor officiating. Interment to follow at the Loco Cemetery in Loco.

Shirley was raised around Loco, Ringling, Fox and Mountain Home and graduated from Loco High School in 1959. She played basketball all through school and continued to love the game, never missing an OKC Thunder game. She would call everyone interested to remind them of game times. She married Ronald Gene (PeeWee) Rue in 1958 and they had three children.

Shirley owned and ran the Loco Café for many years and was the beloved Hamburger Queen to all ranch hands and oilfield workers in the area and she had a nickname for each of them. She also worked at the Ringling Nursing Home taking care of her Daddy until he passed, and she sat with the deceased at the Alexander-Gray Funeral Home.

After PeeWee’s death, she married Jack McCartney and he also preceded her in death. Shirley is also preceded in death by her youngest son, Ronald Gene (Ronnie) Rue, Jr; her parents; sisters-Doris Rogers, Mary Jo Barnes-Fish and MayDell Wilson.

She is survived by daughter Pamela Fye of Oklahoma City, son Johnny Rue and wife Michelle of Duncan Oklahoma; granddaughters – Serenity Graham-Forney and her husband Billy of Harrah/Newalla, Tierney Hodges and her husband Tyler of Piedmont, and Alyssa Rue of Denver; and great-grandchildren Austin Lee Forney, Mason William Forney and Thatcher Wayne Hodges.

Family visitation will be held Monday evening from 6 to 8 pm at Alexander Gray Funeral Home of Ringling.

Online condolences can be sent to alexanderfuneralhome.org.