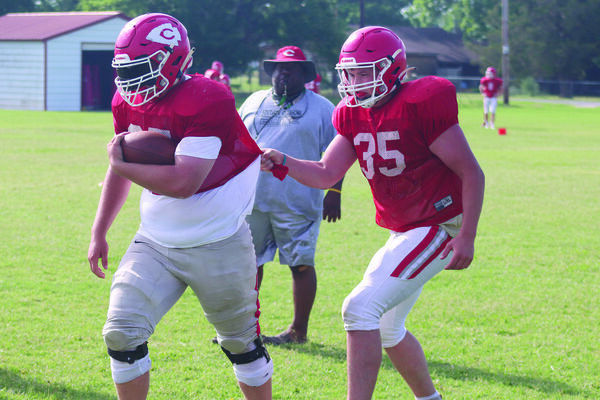 Comanche football coach Casy Rowell gets excited when he talks about spring football practice. The Indians began spring practice last week and it concludes this week. Last Friday was the first practice in full pads.

The numbers for the spring are a little low with about 25 to 30 players, but according to Rowell, what the team lacks in quantity, it makes up for in quality.

“We’ve got a really talented group of newcomers that came in and so they all are going to add value to the team and then we have a bunch of good veterans,” Rowell said. “We have veterans like Kooper Doucet, Tucker Oliver, Noah Presgrove and Logan Bain. Some of those veterans are showing out there.”

Bain is having a great spring after winning the Class 3A state title in the 110-meter hurdles during track season.

And Doucet, the quarterback, is doing his job by getting Bain the ball.

“Kooper’s had some ups and downs over the years, but this is the most focused I’ve ever seen him,” Rowell said. “He is dropping those balls in right where they need to be. A focused Kooper Doucet is dangerous.”

Then there is a group of experienced and battle-tested linemen up front led by Cade White. White is on several colleges’ radars and has been selected to participate in an elite camp this summer in Dallas where players earn recruiting stars.

“Travis Monson is coming back again,” Rowell said. “He’s looking like a freaking animal. He’s a huge kid. Having him and Cade out there on the line looks pretty dang intimidating. Then there is Brady Dobbins who started at center for us last year. If we can find some younger guys to fill up the rest, we will be in real good shape.”

They will be protecting Doucet and opening holes for running back Tucker Oliver, who rushed for more than 1,000 yards last season.

Then there are several newcomers out on the field. Gabe Diaz played quarterback at Empire last season. Landan Steele and Ian Essex are also move-ins who played a big part in the baseball team reaching the regional finals during the baseball season.

There has not been much change to the base offenses and defenses, though Rowell said there has been a little change in the offense.

“We’re just trying to simplify some of our routes and simplify our play selections,” Rowell said. “It’s not a very big playbook, so we’re just repping those plays over and over and trying to match our drills as closely as we can to the plays. I see it has paid off already. I think we’re really honing in on keeping it simple. Every year I learn a little more about coaching, so in the spring, it’s fun to be able to apply some of that stuff.”