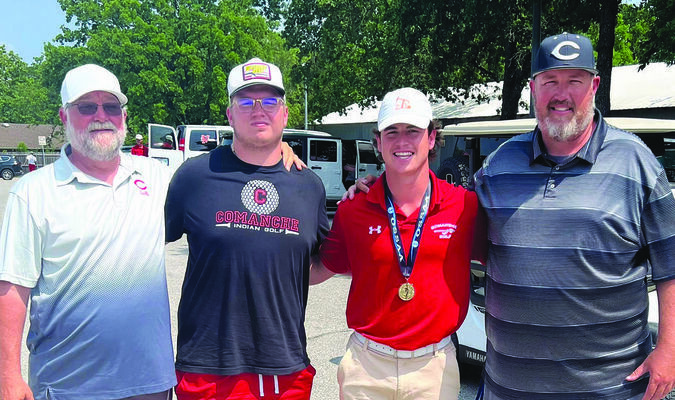 Kooper Doucet surprised everyone except for maybe himself after football season when the two-time state finalist in wrestling made the decision to forego his junior season of wrestling to concentrate on his golf game.

“I’ve always started out really rocky (at the beginning of golf season,” Doucet said. “I never really got going until I started playing more and playing in the summer is when I started to get better.”

Doucet was facing hand surgery after the football season and knew there would be quite a bit of time to recover.

“That would have put me back in wrestling and put me even further back in golf,” Doucet said. “It’s always been kind of a dream of mine the last five or six years to play college golf somewhere. So, I just finally decided to do that. I called my dad and told him that I was just going to focus on golf. I wanted to get better in golf and see if I can get recruited somewhere and he just said, ‘That’s fine, but you’re going to put in the time and the work.’”

He got a surprised reaction from his friends and peers who had watched his older brother, Konner, win four straight state titles and now wrestles for Oklahoma State.

“A lot of people were shocked,” Doucet said. “I mean, two times a runner up your freshman and sophomore year. It’s not easy and it’s definitely uncommon. At first everybody was like, ‘Oh, no,’ but everyone has kind of stuck with me, though.”

The work paid off. Doucet placed sixth at the Class 3A State Tournament at Lakeview Golf Course in Ardmore. It was his highest finish in three years of qualifying though the tournament was called off his freshman year because of COVID. He finished 13th in his sophomore season.

Doucet said he started off slow in each of the seasons and while his junior season got off the same way, he was able to find his stroke earlier than previous seasons.

The son of Benji and Krystal Doucet grew up playing with his dad on the golf course. He started playing in tournaments when he was 11 years old and had a natural knack for the game.

“I was probably a lot better in my younger days, because I was a lot more serious about it,” Doucet admitted. “Now, I’m trying to get back into it and get back where I need to be to get recruited and everything else.”

He has talked to a couple of colleges already but has not received any official offers.

The incoming senior, who says the best part of his game right now is his mid-irons, will be busy this summer. He will be traveling to Florida to play in a tournament and also playing in tournaments in Texas and Oklahoma.

His results this summer will play a part in his decision on whether to get back on the wrestling mat next year and to have one more shot at a high school state championship after winning one in junior high.

“That’s still up in the air,” Doucet said. “It depends on how the summer and recruiting goes. We’ll have to see.”

Comanche fans can expect to see him back on the football field for his senior year.

“Spring practice was a lot of fun,” Doucet said. “We have a lot of good guys coming out and a lot of new faces and stuff. As long as we keep working hard this summer we should be just fine and ready to go for the season.”