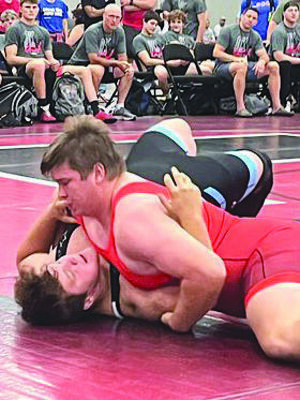 No one needs to tell Cade White he is having a summer that would make most high school athletes envious.

“Oh, I’m 100 percent blessed,” White says without hesitation. “I’m blessed to have the support group and my family to help me get all those places. First of all, the support of the coaches to be letting me do this and giving me the opportunity to do this. Also, I have to give credit to God. Without him, I ain’t doing any of it.”

The opportunities he is being blessed with are getting a chance to go to football and wrestling camps competing against athletes of the highest level - and holding his own in the process.

When he sat down last week for an interview, he had been to an elite football camp at AT&T Stadium in Dallas, Texas and then represented Team Oklahoma in a dual wrestling meet against other states.

In that competition, he went 11-4, including beating state champions from other states.

White has already received a football offer from Southwestern Oklahoma State University and this week he was preparing to go to a football camp at Northwestern State. He went to a football camp at East Central, Bixby earlier this summer and there are more to come. He’s also going to wrestle at the elite national tournament in Fargo, N.D.

He is looking at playing football at the next level and while there is no dream college he wants to attend, he does have certain criteria he is looking for.

“The first is how well I mesh with the coaching staff,” White said. “The second is what kind of sports medicine program do they have. Third is the location, I’d like to be close to home. Yeah, it’d be cool to go play in California, but how many opportunities would my mom get to come see me play. Those first two, though, are the most important.”

He has learned a lot about football and wrestling, but he has also learned about his own abilities. Coming from a small school like Comanche, he wasn’t sure how he would stack up against players from bigger schools.

“I found out there are few 6-foot-7 guys out there,” White said. “Most of the guys looked like me. The difference was those schools like Bixby just had more guys my size than we do at smaller schools. I was able to compete with those guys. I’m thinking if I can cut two-hundredths of a second off my 40 time, I’m right there with them. I’m not intimidated by those guys. I got to the point where I realized I could play with these guys and wrestle with these guys.”

He also realized he didn’t have to keep his weight up as he has slimmed down since last high school wrestling season.

Being a dual sport athlete in football and wrestling has helped him in both pursuits.

“In sixth grade, I only played football and coming into seventh grade year, coach Rowell said I should come out for wrestling because it would be good for me, too,” White said. “When you wrestle at heavyweight and when you are playing on the line, it’s all about getting your hands inside. They go hand-in-hand and vice-versa. If you are a better football player, you might be a better wrestler. If you do both sports, you get to be pretty good at the other. It’s great that those go hand-in-hand.”

Going into his senior year he has two goals - win a state championship in wrestling and help the football team get a home playoff game.

As a senior though, he realizes he will have underclassmen looking up to him.

“Being one of the bigger linemen on the team and being the one that’s been to all these places, I’ve got to step up and show these guys how to do things correctly,” he said. “If I can just plant a little seed here and a little seed there for those younger guys that would be great. I don’t want to leave the program worse than when I came into it. I want to come back in a couple of years and be like, ‘Dang, they’re doing pretty good.’”