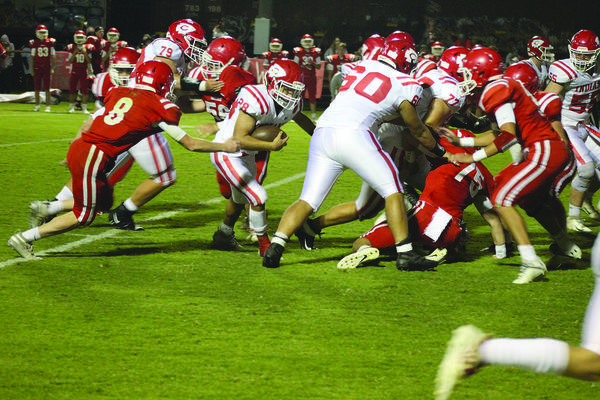 Comanche came close to picking up its first road win of the season, but a go-ahead touchdown in the fourth quarter by the Wolves and a big drive at the end of the game secured an 18-14 win for the home team.

Trailing 12-0 in the second quarter, the Indians suddenly found a spark to close out the final 1:41 with two scores and a 14-12 halftime lead.

The Indians could not keep the momentum going in the second half, however. Comanche’s defense had two red zone stops, but the offense couldn’t punch the ball out deep in its own territory, keeping Davis in good field position most of the second half.

“I believe in our staff and our players,” said head coach Casy Rowell in a Facebook post after the game. “We will continue to work hard and believe. We are close, but not there yet. We have all the ingredients. However, we must find a way to get the job done. By improving on the little things, we can make a good football team great.”

Davis outgained Comanche 310 yards to 155 in total offense. All of Davis’ yards came on the ground in their run-oriented offense. The Wolves did attempt two passes with the only completion to Comanche’s Devon McCarty for an interception, which set up the Indians’ second touchdown of the night.

Comanche stayed on the ground more than in past weeks as well. The Indians attempted just 14 passes on the night, about half of their usual attempts. About half of those passes came in the final drive of the second quarter.

The Indians had trouble slowing down Davis quarterback Colin Dulaney at times. He scored two of the three Wolves’ touchdown and played a crucial role in helping his team run out the last half of the fourth quarter. The drive was all on the ground while picking up several first downs along the way. Dulaney finished with 154 yards on 26 carries.

Davis struck first in the opening quarter on a 27-yard run by Dulaney to give the Wolves a 6-0 lead. In the second quarter, a Davis running back scored from three yards out to push the lead to 12-0.

The Indians would then get the offense going. Starting at their own 32, Comanche drove 68 yards in 13 plays, capped off by a 3-yard quarterback sneak by Kooper Doucet. Doucet then threw a two-point conversion pass to Mason Kulbeth to cut the lead to 12-8.

On the next Davis possession, McCarty snagged an interception and the offense took over at its own 43. Doucet hit Kulbeth for 13 yards on the first play to get the Indians into Davis territory. Four plays later, they would convert a fourth-and-1 on a 4-yard run by Lake Epperson to keep the drive alive.

Two plays later, with time running out, Doucet unleashed a Hail Mary to the opposite the side of the field he was on and the ball floated into the hands of Bryson Evans, who caught it about the 5-yard line and managed to break a couple of tackles and fall into the end zone for the touchdown and the halftime lead.

This week, the Indians host Marietta for homecoming. Marietta (1-3, 1-1) is coming off its first win of the season, a 21-6 decision over Tishomingo.