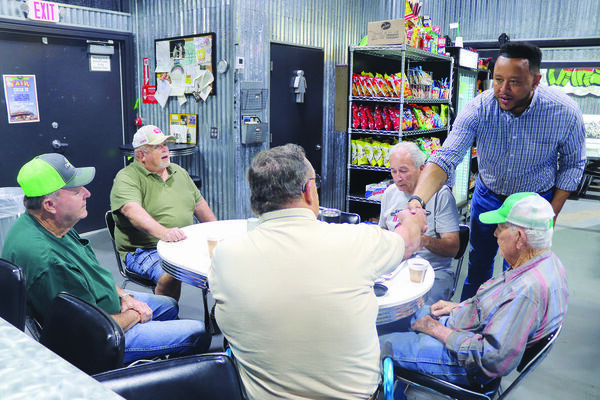 Shannon was at Thirsty’s Cold Pop Shop in Comanche on Tuesday morning talking to local residents, explaining his platform, answering questions and hearing their concerns as part of his 100-city tour around the state.

“We’re a country in crisis right now,” Shannon said. “But I don’t believe it’s too late. I think there’s a chance to turn things around. It’s just going to take leadership.”

Shannon said he has been blessed to live in the country and wants to see that blessing continue for future generations.

“I believe to whom much is given, much is required and this state and this country has been very, very good to me,” Shannon said. “I feel like I’ve got the skillset to go to D.C. and make a difference.”

Shannon, 44, is a former state representative and former Speaker of the House. He currently is in the banking business in Lawton. He grew up in Lawton, graduated from Cameron University and then went on to graduate law school at Oklahoma City University. He was first elected to the State House at the age of 26 before later being elected as Speaker of the House by colleagues.

“By the time I was 40, I was CEO of a bank and that story only happens in the United States of America,” Shannon said. “And that’s why I like to say America is the home of systematic opportunity. It’s not the home of systematic racism. But, if you listen to the narrative out of Washington, they would have you to believe that this country is too far gone and that the system only works for people from a specific zip code. It’s just not true. This is still the land of opportunity.”

Shannon is basing his campaign on what he calls the 3-Cs - the Constitution, Capitalism and Christianity.

He said he believes in a secure southern border, a balanced budget, the Second Amendment, and term limits for Congress.

He said he realizes the pain people are going through with things such as high gas and food prices and inflation.

“We talk to people all the time that are making a decision between filling up their tank, buying groceries or buying medications,” Shannon said. “We talked to a young lady the other day in Davis who lived in Ardmore and was thinking about quitting her job in Davis because she couldn’t afford the gas.”

For Shannon, it all begins with a balanced budget.

“The first thing we need is a balanced budget. We have got to balance the budget,” Shannon said. “We did it when I was Speaker of the House here in Oklahoma. You all do it in your own businesses and personal lives. The only people who don’t balance a budget are in Washington D.C. and they just keep printing more money.”

Shannon placed second behind Markwayne Mullin in June’s primary, but he thinks he can overcome the 20-plus point deficit to win the nomination in the August run-off..

“In Oklahoma, second place in the primary is not a bad place to be,” Shannon said. “Kevin Stitt, Kevin Hern, the congressman from Tulsa, Matt Pinell, they were all almost 20 points behind and came back to win the run-off. There’s a big history there. Dana Murphy was over 20 points behind in corporation commissioner in her primary vote. We just have to consolidate the anti-Washington vote and we are doing that.”

It is Shannon’s second attempt to win a U.S. Senate seat. He resigned from the House in 2014 to run for the seat of the retiring Tom Coburn. He was beaten by James Lankford in that race.

The winner of the GOP run-off will face Democrat Kendra Horn in the general election in November.