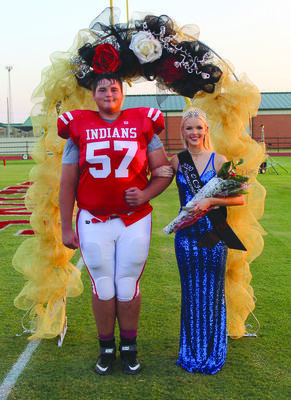 The Comanche Indians were supposed to play district opponent Marietta for their homecoming game on Friday. The COVID-19 virus had other plans.

On Thursday, Marietta called and had to cancel due to contact tracing. A few hectic hours later, Comanche coaches finalized a non-district game with Class 3A Perkins-Tryon, who had also had a game cancelled.

Friday, the Demons made the long trip from near Stillwater to Comanche and left with a 49-26 win.

There was a connection between the two teams. Perkins-Tryon head coach Bruce Williams was once an assistant coach at Comanche several years ago.

“At first, when we found out Marietta was canceling, it was upsetting,” said Casy Rowell, Comanche coach. “We really wanted to get a district game in and the way it is set up, it could make a difference in wins when it comes to making the playoffs.”

Rowell, now, though, is looking at the bright side. There was no pressure of a district game, which allowed his team to work on some new things they had been practicing. There was also virtually no time to game plan, which Rowell said could be helpful in the long run.

Even though the Indians have lost four straight, some goals are still in sight.

“With Lindsay beating Davis last week, it still gives us a shot at getting the second seed in the district and to host a playoff game,” Rowell said.

Regardless of what the outcome of the game was going to look like, the Indians wanted to play.

“The players told us they didn’t care who they played, they just wanted to play,” Rowell said.

Perkins-Tryon built a 14-0 lead in the first quarter, including a 41-yard fumble return for a score.

In the second quarter, the Demons scored five seconds apart. Following the first score on an 18-yard run by the Perkins-Tryon quarterback, Comanche fumbled on its next possession and the Demons fell on the ball for the score and a 28-0 lead.

The Indians got on the board less than a minute later when quarterback Kooper Doucet found a wide-open Bryson Evans and the two connected for a 76-yard catch and run.

The Demons would answer back on their first play after the kickoff with a long 65-yard pass of their won. They would add another score before halftime to take a 42-6 lead.

Comanche scored first in the third quarter on a 7-yard touchdown pass from Doucet to Mason Kulbeth to make the score 42-12.

Perkins-Tryon then pushed the lead to 49-6 about five minutes later.

In the fourth quarter, Lake Epperson ran up the middle for a 16-yard touchdown run to make the score 49-18, then later in the quarter Doucet and Kulbeth connected again. This time it was a 51-yard touchdown pass play that would make the final, 49-26.

Doucet finished 8-of-15 for 217 yards with three touchdowns and an interception.

Epperson had 32 yards on 13 carries with a touchdown. Gage Allie had six carries for 25 yards.

Defensively, the Indians were led by Devon McCarty with five tackles. Colton Newton and Owen Bigford had four tackles each, followed by Kasen Vanbuskirk with 3.5 and Lucas Gordon and Hunter Beck with three each.

“We haven’t played our best game, yet, and I’m excited to see what we are going to be able to do for the rest of the season,” Rowell said.

Comanche travels to play Frederick in a district game (5-0, 2-0) this Thursday.

“They are a good team,” Rowell said. “We didn’t play well against them last year in the first game and we’re looking forward to getting another chance.”