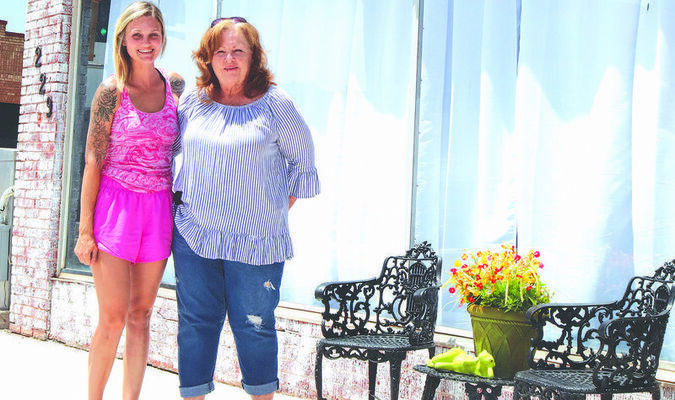 What started as a hobby has turned into a full-fledged career for one local photographer, who not only has seen her business grow but has helped brighten downtown Comanche.

“I’ve been taking pictures my whole life, but it’s always been of my family,” said Jayden Rowell. “I was always harassing my sister to take pictures of her.”

Two years ago she was working at the hospital when COVID hit. In July of that year her youngest son was born.

“It was just overwhelming and wearing me out,” Rowell said. “Some people had reached out to me that weren’t family members – friends and people like that. So I decided that I was going to pursue the photography full time so I could be home more with my kids and spend more time with them. And really from there it just took off.”

She didn’t have a studio. Many of her pictures were outdoor settings and she used part of the old apothecary building to do some inside photos for her RowCal Photography business.

“I probably went out to the mountains more than 50 times,” Rowell said.

She and her grandmother Rhonda Miller began to looking for a place she could call her own for a studio.

“During the winter months or slow season I just wanted to offer something different and not just for photography,” Rowell said. “I really wanted a place that people could use for events and looked good in pictures. Not just like an open room with white tables and chairs. It will be a place for people to decorate to make picture-perfect pictures. I had been over to the old Byford building before when I was in school for FCA and things like that so I just kind of wanted to offer the same thing to the area.”

They were looking at buildings downtown when they happened to catch the owner coming out of the building on the northeast corner of Rodeo and Oak Main.

They purchased the building earlier this year and began to remodel in March. The long hours and the sweat they have put into it is paying off. The front room is nearly complete. Once they finish it then they will start working their way toward the back. Next is the kitchen area followed by another open area.

Rowell has already used the building as a studio and plans to open it up for other photographers to use in the near future.

“The back was kind of like a garage,” Rowell said. “We intend on using that but that’s going to be a slower process. It needs a lot more work. We’re going to have to tear out walls and air conditioning, electrical wiring and all that stuff out of the back before we can start painting and decorating.”

It has definitely been a family affair to get the business up and going. Rowell relies on her grandmother’s eye for decorating the studio and her husband Casy and her father Jason Miller have done a lot of the heavy lifting and decorating over the summer.

She also plans to add more to the outside of the building with possibly a mural at some point.

Word of mouth and social media has been a good source of business.

“It got to be more than just family and friends,” Rowell said. “Thanks to social media, I’ve had people reach out to me that are complete strangers, people from different cities, which I thought was really cool. I’m really blessed that I have family and friends around here that have believed in me and liked my work.”

There’s also a sense of community pride in revitalizing the old building.

“We wanted to make it ours, but we wanted to bring people back to Main Street and catch people’s eye as they are coming through town,” Rowell said.

She can be found on Facebook at RowCal Photography.