Palmer excited to be part of Miss Comanche tradition 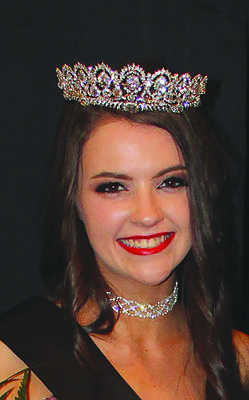 Nearly a week after being crowned Miss Comanche 2020, Mystik Palmer was excited to talk about the experience and process of becoming the ambassador of the city.

“It was something I’ve thought about since I was younger,” Palmer said. “I had seen it and I always looked up to the girls that were a part of it. I thought, ‘Wow, the confidence it must take to get up on stage, I want to be able to do that one day.’”

Even though the competition was delayed three times due to the COVID-19 pandemic, Palmer enjoyed herself tremendously, describing it both as fun and a great experience.

With the delays, she had more time than she wanted to be prepared for the different categories of competition.

Palmer won the talent competition by dancing to “Jailhouse Rock.”

“I’ve been dancing and cheering my whole life,” Palmer said. “That’s always been my favorite part of cheering is the dancing and I’ve always loved doing it at competitions and on the sidelines. So, I thought, ‘Hey, why not try to put together a fun dance and try to entertain people.”

She is originally from California, but has nearly spent her whole life in Comanche, starting in kindergarten.”

Now that she has been back in school for a week, she has received many congratulations.

“It’s crazy because everybody’s been coming up to me and saying congratulations and say that they are so proud of me,” Palmer said. “It’s just been such a fun experience. People were telling me they had so much confidence in me and telling me they knew I could do it.”