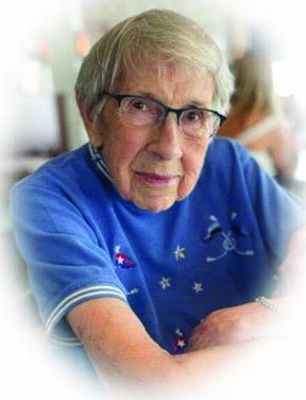 Doris Marie Pyeatt, 90, passed away Saturday, July 23, 2022 at the Lower Cape Fear Hospice in Wilmington, North Carolina. Mrs. Pyeatt had been a longtime resident of the Duncan and Comanche area.

Funeral services were Monday, Aug. 1, 2022. There was a graveside service at the Fairlawn Cemetery in Comanche. The services were officiated by Reverend Dean and Freda Hall.  Arrangments were entrusted to the family care of Carter-Smart Funeral Directors.

Doris was born Aug. 23, 1931 in Wilmington, N.C. to Troy Glendale and Ila (Wilkins) Motte. After graduating high school, she went to Lee College where she later decided to become a missionary. With just an accordion and a suitcase of clothes of clothes, she headed to san Antonio, Texas to become a missionary in Mexico. Instead she met the love of her life. On Nov. 29, 1954, she married Joe E. Pyeatt, Jr. Within four years, her family had grown by two children, daughter Debra Jean Pyeatt and son Steven Dale Pyeatt.

Once the family moved to Duncan, she became the secretary-bookeeper at the Elks Golf and Country Club for over 20 years. She then went to work at Security National Bank and Trust in the Safe Deposit Department for over 15 years. During that time, she was also the Spanish interpreter at Security National Bank. Upon retirement, she enjoyed spending time with her husband, doing things like craft shows in Duncan as well as in Dallas and Wilmington. There are many babies and children that are the proud recipients of one Doris beautiful hand crocheted baby afgans or clothes.

She is survived by her daughter, Debra Jean Pyeatt of Wilmington and her sister, Caroline Glyndale (Motte) Williams, also of Wilmington as well as numerous cousins, nieces and nephews.