Lady Indians one win away from state tournament 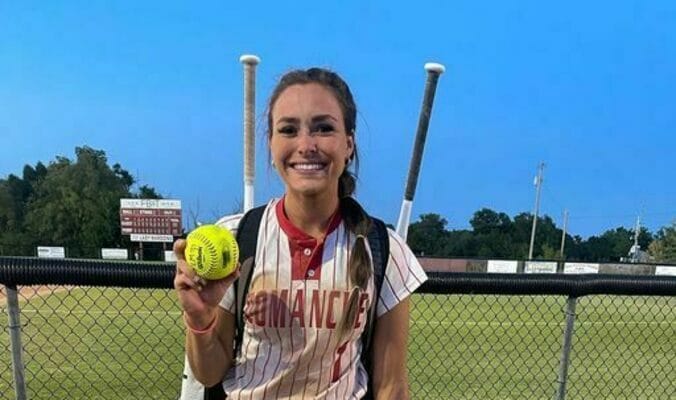 Comanche senior Gracee Miller had not hit a home run all season. That all changed Thursday when Miller took to the plate with her team down 1-0 in the bottom of the fourth against regional tournament host Perry. The two teams had advanced in the winner's bracket with wins earlier in the day.

The left-handed batter got the pitch she was looking for on a full count and she deposited the pitch over the right field fence to give her team a 3-1 lead. It would be a lead Comanche would never give up.

All the runs in the game came in the fourth inning. Backed by a solid defensive effort behind her for most of the game, Comanche starting pitcher Kamrey Rendon held the top-seeded Lady Devils (32-6) scoreless through the first three innings. Perry, though, would take advantage of back-to-back errors by Comanche to push across a run in the top half of the fourth inning.

Comanche (26-8) would strike back quickly in the bottom half of the inning. Brighton O'Connor led off with a single. Two batters later, Jentry Whaley put down a bunt and the throw to get Brighton at second was late. Both runners would advance on a passed ball before Miller's homer brought them in.

Comanche was not done, however. Josey Harris singled and would later score on an RBI single by Bre Gill to push the lead to 4-1.

Perry's next serious threat came in the top of the seventh when the Lady Maroon had runners on first and second with no outs. Rendon would get out of the jam with two balls caught in the outfield and then she recorded the final out on a ball hit back to the mound.

Comanche had just five hits in the game with Miller recording two of them. Gill, O'Connor, and Harris each had one.

Rendon pitched a complete game, giving up six hits with no earned runs. She struck out two and had no walks.

Behind two home runs and a bases-clearing triple, the Lady Indians won their first game of the regional tournament over the Lady Devils.

Kamrey Rendon helped her own cause when the Comanche pitcher blasted a two-run home run over the center field fence in the bottom of the second inning to give the Lady Indians a 2-0 lead.

An inning later, Jentry Whaley homered over the left field foul pole to push the lead to 3-0.

Prague got its first run in the top of the fourth, but Comanche would extend its lead with five runs in the bottom of the fifth, highlighted by a three-run triple by Josey Harris.

Harris then came in relief on the mound for the final two innings of the game. She gave up a run in the sixth and then closed out the game in the seventh.

Comanche had eight hits in the game with Whaley leading the way by going 2-for-3.

Editor's note: Story was written using the broadcast from the Comanche Athletic Department livestream and the Gamechanger scoring app.