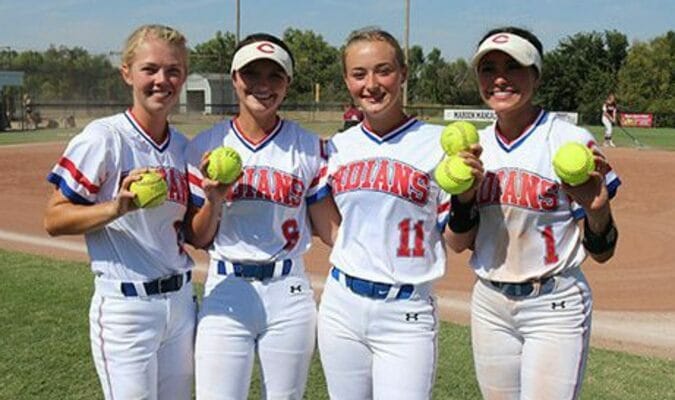 The question was answered a couple of seconds later when the ball sailed over the large scoreboard left of the center field fence by at least two feet.

Whaley looks like a typical power hitter like I look like a typical ballerina. But her second home run in as many days helped her team grab its second straight regional tournament championship and a back-to-back trip to the state tournament. On Thursday, she hit a home run over the left-field foul pole. The two-run blast on Friday put her team up 5-4 after Perry had jumped out to an early 4-0 lead. Raylee Chaney hit her first home run of the season earlier in the inning, which was a three-run shot. Comanche went on to win by a 6-5 score.

It wasn't just Whaley and Chaney hitting the long ball in Perry though. They were joined by Kamrey Rendon and Gracee Miller, who along with Whaley and Chaney, combined for five home runs in the regional.

What is remarkable is through the first 32 games of the season, the Lady Indians had a total of just six home runs and then they hit five in two days over three games. Of the four Comanche players that hit homers at the regional, only Whaley and Rendon had gone deep all season and that was only once each. Senior Brighton O'Connor led the team going into the regional with three home runs on the season.

The Lady Indians could not have found a better time to kick in their power game.

"(The power) has always been there, I knew we could hit them," said Aaron Minor, Comanche head coach, after the regional championship. "We were struggling a bit, but I knew we were capable of it."

Sure, there were hugs, smiles and celebratory jumping, but there was no dogpile on the diamond and the celebration ended nearly as quickly as it began. While one goal was met, another one still lies ahead. It is obvious this year's team wants more than just the thrill of playing in the state tournament. They want to win while they are there.

The Lady Indians open against North Rock Creek in the nightcap on Thursday at 6:30 p.m. at USA Hall of Fame Stadium in Oklahoma City.

Todd Brooks is the owner/publisher of The Comanche Times. He can be reached at 580-439-6500 or comanchetimes@pldi.net.