Royals pull away from Indians 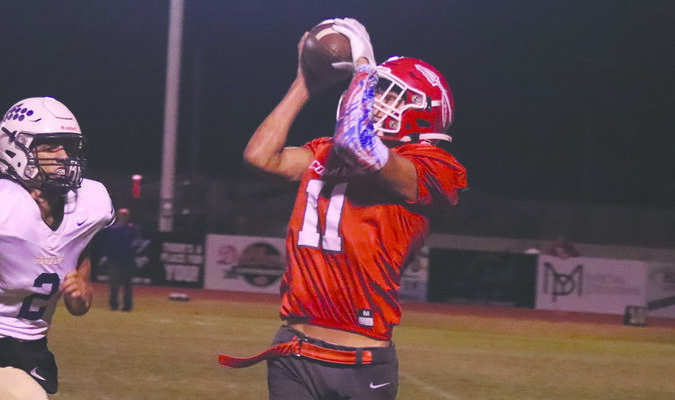 othes keeps getting larger for the Comanche Indians every week and last week was no different as Community Christian paid a visit and left with a 45-7 win last Friday.

No less than five players for the Indians were cheering instead of playing last Friday.

While Comanche (2-4 overall, 1-2 district) was able to hang close in the early going, Community Christian wore the Indians down and picked up a key district win.

The Indians are currently tied with Purcell (3-3, 1-2) for fifth place in District 2A-3 heading into this week’s game at Frederick (4-2, 2-1), which is tied for third in the district with the Royals.

In the last two weeks, Frederick has shutout Purcell and Little Axe.

Against Community Christian, the Comanche offense stalled on its first possession at the Royals’ 32. Community Christian then drove down the field in five plays, scoring on a 12-yard quarterback run. The two-point conversion made the score, 8-0.

The Indians answered right back. On the first play from scirmmage from his own 34, quarterback Kooper Doucet found receiver Noah Presgrove across the middle and Presgrove took the ball the rest of the way for the 66-yard score. Presgrove’s point after made the score, 8-7 with 7:57 to go in the first quarter.

That would be as close as the Indians would get, however. Community Christian would close out the half on a 23-0 run to take a commanding 31-7 halftime lead. The Royals would then add two more touchowns in the third quarter to put the game away.

Comanche had a long second-quarter drive wiped out by an interception in the end zone. The Indians had driven from their own 35 to as deep as the the Royals’ eight before finding themselves with a fourth-and-11 from the 13. Doucet’s pass into the endzone was picked off to end the scoring threat.

Community Christian outgained Comanche 388 to 262 yards in total offense.
Doucet was 11-of-27 passing for 205 yards with a touchdown and an interception. Presgrove had more than 100 yards receiving to go with his touchdown. Comanche was limited to 57 yards on the ground.